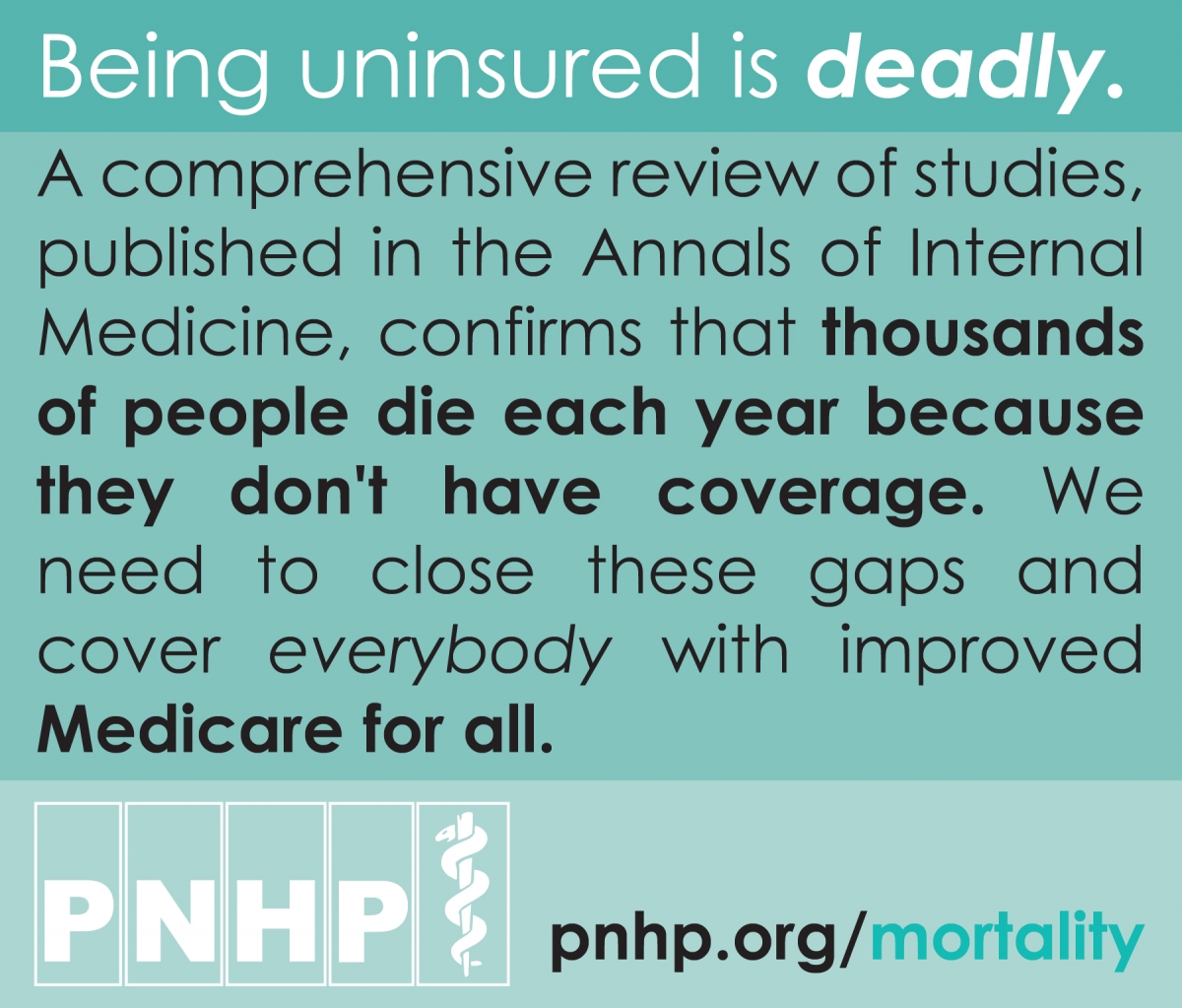 PNHP co-founders Steffie Woolhandler, M.D., M.P.H., and David Himmelstein, M.D., have published a landmark review of studies in the Annals of Internal Medicine that points to a link between lack of health insurance and preventable deaths. Their review, “The Relationship of Health Insurance and Mortality: Is Lack of Insurance Deadly?” was published June 26, 2017, as the U.S. Senate considered a major health overhaul.

Although estimates range, there is a strong scientific consensus that uninsurance leads to tens of thousands of deaths annually. If any of the various GOP health bills become law, millions of Americans would lose coverage and the number of preventable deaths would increase dramatically. The “Better Care Reconciliation Act,” for example, would result in 22 million people losing coverage and an additional 29,000 deaths per year.

Sen. Sanders cites study findings on the floor of the Senate

In arguing against the “Better Care Reconciliation Act” on June 26, 2017, Sen. Sanders said, “The horrible and unspeakable truth is, that if this legislation were to pass, many thousands of our fellow Americans, every single year, will die, and many more will suffer and become much sicker than they should.” He submitted the Annals of Internal Medicine review, published earlier that day, to the Congressional Record.

Health insurance can make a life or death difference, study says
By Shanika Gunaratna
CBS News, June 26, 2017
In the midst of the complex, politically-charged health care debate unfolding in Washington, medical researchers say the science is clear: being uninsured increases one’s risk of dying. That’s the headline out of a new big-picture analysis of existing research that explores the relationship between insurance coverage and mortality. Continue reading…

As lawmakers debate GOP healthcare bill, new study finds stripping people of insurance can be deadly
By Melissa Healy
Los Angeles Times, June 26, 2017
The number of Americans who die prematurely would rise by about 29,000 each year if the health reform plan put forth by Senate Republicans were to go into full effect, a new report suggests. Continue reading…

When Cutting Access to Health Care, There’s a Price to Pay
By Eduardo Porter
The New York Times, June 27, 2017
It doesn’t require an advanced degree to figure out what limited access to a doctor can do to people’s health. A review of studies published this week in Annals of Internal Medicine reported that health insurance substantially raises people’s chances of survival. Continue reading…

The hard-to-answer question at the core of the health-care fight: How many more people might die?
By Philip Bump
Washington Post, June 27, 2017
There’s no real question that if the Affordable Care Act is repealed the number of Americans without insurance coverage will increase. According to the Congressional Budget Office, the percentage of those under age 65 who can’t afford or opt out of coverage would jump to 18 percent by 2026. Continue reading…

28,600 Lives Per Year
By James Hamblin
The Atlantic, June 30, 2017
Like everything undertaken in pursuit of health, returns vary person to person and case to case. But when constructing a health-care system for an entire nation, there is reason to know the stakes at a broad level. And despite [a variety of] factors, health insurance time and again proves to be a life-saving proposition. Continue reading…

Stripping Americans of health insurance could be deadly: study
By Ronnie Cohen
Reuters, June 26, 2017
Health insurance saves lives – that’s the conclusion of a report released on Monday, just in time to weigh into the debate among Senate Republicans considering a bill that could strip millions of Americans of coverage. Continue reading…

Health Care Cuts Will Increase Odds Of Dying For The Uninsured, Medical Review Predicts
By Dan Vergano
BuzzFeed News, June 26, 2017
About 28,600 more people could die every year in the US if a proposed Senate health care bill becomes law, suggests a review of medical studies released on Monday. “Being uninsured can be lethal,” review author Steffie Woolhandler of City University of New York told BuzzFeed News. Continue reading…

Does Health Insurance Save Lives?
By F. Perry Wilson, M.D.
MedPage Today, June 26, 2017
You may have noticed that there’s a bit of a debate going on about health insurance in this country. Reflecting the great diversity of American political life, we have those calling for a universal, single-payer healthcare system and those who feel, well, that the government should take a more limited role. Continue reading…

Lack of insurance is tied to higher death rates, new study shows
By Maria Castellucci
Modern Healthcare, June 26, 2017
As the Senate debates and amends its Obamacare replacement bill projected to leave 22 million without insurance, a new report found that those with insurance live longer than the uninsured. The report, published Monday in the journal Annals of Internal Medicine, highlights the influence insurance can have on mortality. Continue reading…

Lack of Health Insurance Can Shorten Lives: Study
By Alan Mozes
HealthDay, June 29, 2017
In the midst of another struggle over U.S. health care coverage, a new study finds that Americans who don’t have health insurance face a significantly higher risk for premature death. Continue reading…