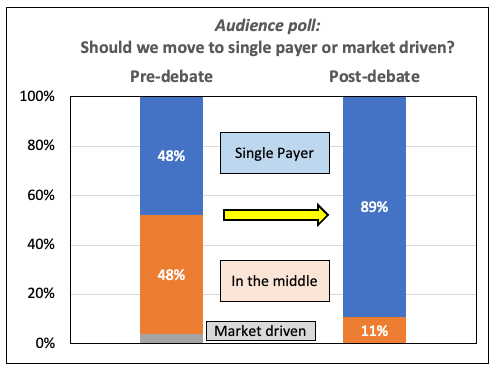 Community Voices Priorities and Preferences of Californians with Low Incomes for Health Care Reform, September 2021, by The Healthy California for All Commission

From the Executive Summary:

Both the public opinion poll and the CBO leader interviews and surveys conducted show strong support for a single, statewide, government-run health care program that covers all people who live in California. The poll suggests that 65% of Californians with low incomes support the concept, with people of color showing greater support: 76% of African Americans, 71% of Latinos, 73% of Asian/Pacific Islanders, 65% of Native Americans and 54% of whites. Similarly, a majority of CBO leaders indicated support for the concept of a single statewide government-run health care program.

Look what’s happening in California: So much support for single payer, from different corners … two diverse examples arrived in the last couple of days.

All of us who educate and advocate for single payer have been in debates, arguing the merits of single payer versus strategies that are pure market (“skin in the game”) and blended (like the ACA). Usually we’re quite pleased to swing opinion 10-20%. Look what happened when Paul Song spoke at USC Keck School of Medicine – a 41-point swing! To 89% support! Paul is a brilliant presenter. But, also, the times are changing … more and more people in health care and out recognize the gaping flaws in the current health care non-system, and the excellent performance of single payer.

Who recognizes it especially well? The population that is most vulnerable and in need. In statewide polling of low income populations and of community-based organization leaders, the Health California for All Commission found a clear consensus: “strong support for a single, statewide, government-run health care program that covers all people who live in California”. That sounds like … single payer.

There’s lots of work left to do. Lots more people to convince, including importantly our legislators. Bills to write, battles to wage. But I think we’ve turned a corner … to widespread recognition of what is known so well outside our country’s borders: single payer is a stunningly efficient and effective solution.