Summary: In a sad echo of 2020, US longevity again fell in 2021 – from 77 to 76 years. Two proximate causes – COVID and chronic disease – have everything to do with insurance gaps. And rising fatal accidents and overdoses reflect a sense of desperation driven substantially by medical care inaccessibility and debt. Single payer would make a huge difference.

While the pandemic has driven most of the decline in life expectancy, a rise in accidental deaths and drug overdoses also contributed, as did deaths from heart disease, chronic liver disease and cirrhosis, the new report found. 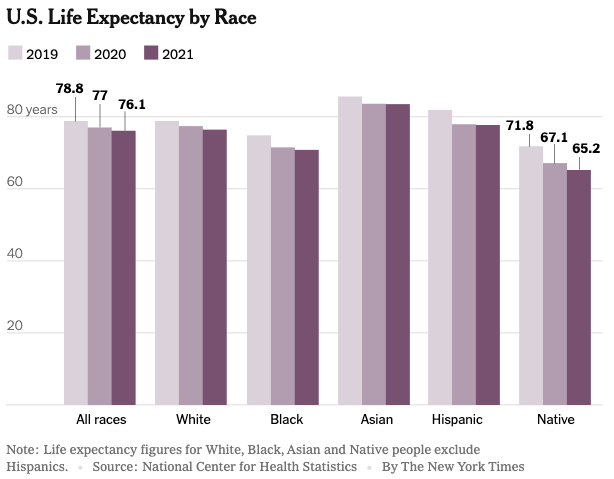 Once again, life expectancy In the US fell, by a year in a year. Stunning, unprecedented. This horrendous backsliding continues an on-and-off declining trend since 2014, and follows a sharp dip in 2020. The huge two-year drop has never been seen before.

See below a graphic representation. Longevity is now far below where it was in 1999, indeed takes us back to 1995. No other nation has experienced this drastic decline. The fall is greatest among Native Americans, and longevity for Black Americans remains the lowest of any group.

What’s the role of health insurance? The NYT doesn’t say. But insurance is a prime culprit. As HJM discussed recently, at least 1/4 of COVID deaths are attributable to uninsurance. Many chronic disease deaths are due to un- and under-insurance. Our lax gun laws and opioid regulation contribute to the accidental deaths and drug overdoses, but also reflect a sense of desperation in part driven by impaired access to health care, along with rising medical bills and medical bankruptcies.

Our insurance system is failing us. Single payer would break this fall. 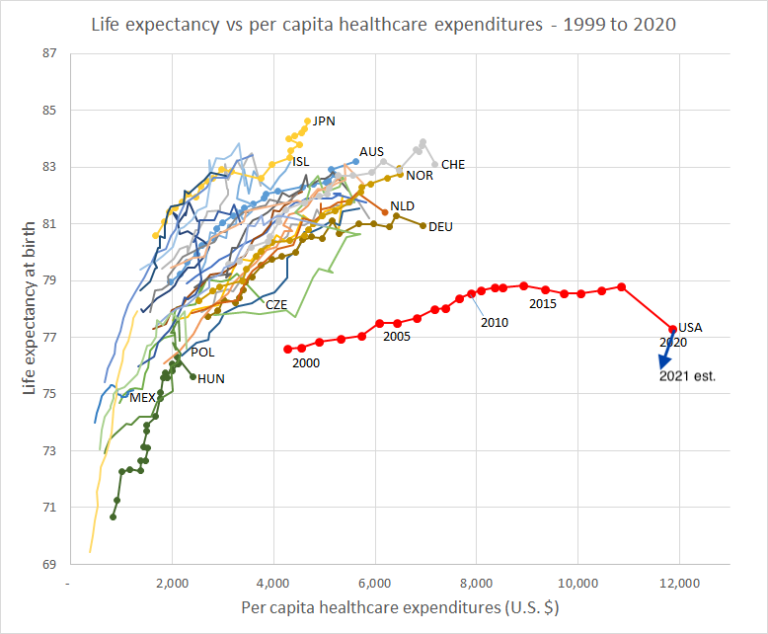 Figure by Charlie Swanson, except 2021 blue arrow by Jim Kahn (real health spending may have dropped due to lower elective care, hence the backward lean).