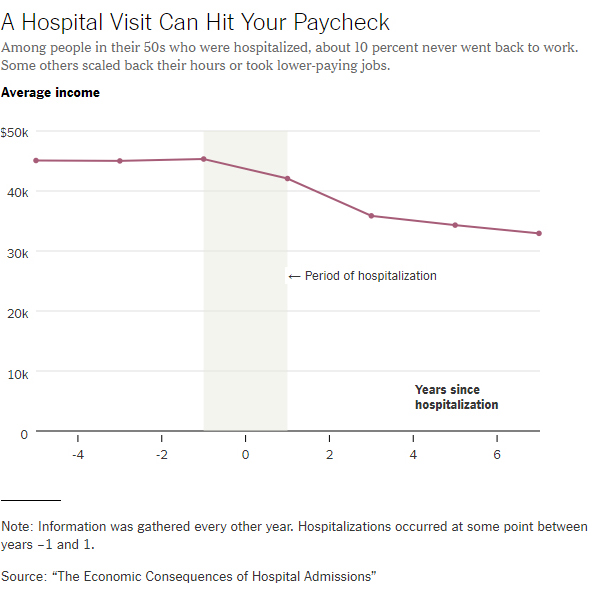 When you get really sick, the medical bills may not be your biggest financial shock.

New research shows that for a substantial fraction of Americans, a trip to the hospital can mean a permanent reduction in income. Some people bounce right back, but many never work as much again. On average, people in their 50s who are admitted to the hospital will experience a 20 percent drop in income that persists for years. Over all, income losses dwarfed the direct costs of medical care.

The pattern and impact are comparable to what happens to workers at a mill when it closes.

The authors of the paper, published in The American Economic Review, were surprised by how often an illness or injury could upend the finances of Americans with health insurance.

“I had sort of  assumed that if they had health insurance, then they had economic protections against health shocks,” said Amy Finkelstein, an economist at M.I.T. and an author of the paper.  “I hadn’t thought about the idea that even with the best gold-plated, fancy health insurance, you could still have a lot of economic risk.”

The researchers focused on hospitalization because it’s one of the easiest ways to pinpoint when a person’s health declines substantially.  They looked at people who had heart attacks, strokes or knee replacements, as well as those who contracted pneumonia or were hit by cars. The only cause of hospitalization they excluded was childbirth.

Hospitalization can cost thousands (or tens of thousands) of dollars, which is why health insurance has been shown in study after study — including a seminal one of Oregon patients in which Ms. Finkelstein was a co-author — to greatly improve the financial security of people who experience illness or injury.

Obamacare brought new insurance coverage to some 20 million Americans, and that coverage has seemed to make them more financially secure. Low-income people in states that expanded Medicaid appear to have fewer medical debts and bills in collections. Fewer of them are avoiding medical care because of the cost.

But the costs of illness are not always limited to medical bills. Being sick can make it hard to work. Though people who had insurance were better protected from hospital bills than people who were uninsured, both groups faced a substantial risk that they would lose income, and a substantially increased chance that they would declare bankruptcy after leaving the hospital.

On average, uninsured people in the study owed the hospital $6,000, compared with only $300 for those with insurance. But the average decline in income for both groups was much larger — an average earnings hit of $11,000 by the third year.  Much of that average — around 60 percent — came from people who never returned to work at all. 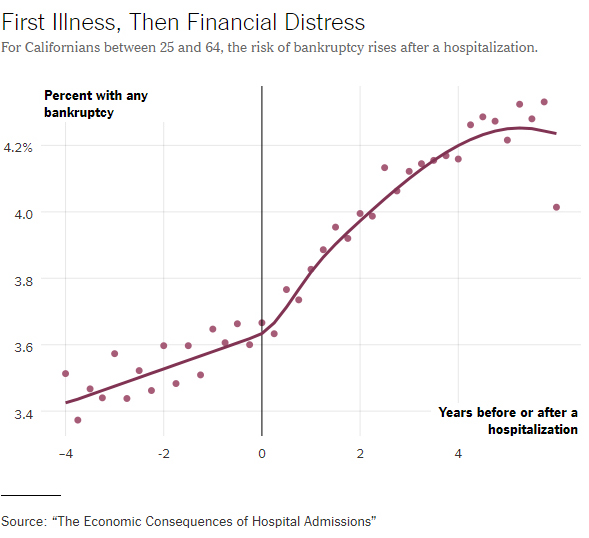 Other research supports the notion that serious medical problems are associated with work interruptions. A 2015 survey conducted by The Upshot and the Kaiser Family Foundation found that, among people struggling to pay medical bills, 29 percent said their illness or injury had led to a drop in household income. In general, the United States doesn’t provide much sick leave, disability or wage insurance to protect people from those kinds of costs.

Yolanda Carrero, who got a diagnosis of breast cancer in 2014,  loved her job in the infant room at a day care. She was fortunate to have health insurance from the day care, where she had worked for 14 years, and short-term disability insurance. She thought she’d need only a few weeks off to recover from a mastectomy. But an infection led to two more operations, and she missed three months of work.

Then, when she returned, she couldn’t lift the infants or sit on the floor with them anymore. Her employer supported her, moving her to another assignment and allowing her to scale back to part-time hours, but the shift was a big financial hit. Her adult son was living with her and helped pick up the slack. “I couldn’t even afford the rent,”  said Ms. Carrero, who lives in Holladay, Utah. “That was a rough few years.”

Ms. Carrero, 49, fared better than many people in the study. After a few years, she left the day care and moved to an advertising agency. She says she misses the children, but the new job is less physically taxing and pays more.

The researchers looked at two major sources of data to understand the financial consequences of a big health shock. One was a large government survey of people in their 50s and 60s. That survey followed people over time, and asked them whether they’d been hospitalized, whether they were working, and how much they were earning. The survey produced the results about the specific income changes that came after a hospitalization. (The income drops might be smaller for younger people, who are further from retirement.)

The team also looked at a big California database of everyone over 24 who was admitted to the hospital, data it was able to match with individual credit reports (names were hidden). The credit report data showed that people’s overall spending tended to go down and stay down for years after a hospitalization, suggesting a drop in income. It also showed large increases in the risk of bankruptcy among people who were hospitalized.

Some people who go to the hospital probably end up with disabilities that make it hard or impossible for them to work. Others may just get knocked off their career trajectories if they must leave a job temporarily while recovering from illness. Other research in economics shows that career hitches, like taking a break to have a child or graduating from college during a recession, can have long-term consequences for people’s earnings, just like plant closings. A health shock may follow that pattern.

“It makes me wonder: What exactly does insurance insure against, and is that the thing that we really want it to insure against?” said Benedic Ippolito, a health economist at the American Enterprise Institute, who has studied medical debt.

To the authors, the lesson of the paper is that standard health insurance isn’t enough — policymakers need to think about ways to better protect people against the income risks that accompany illness. In Denmark, for example, similar reductions in income have been found after hospitalizations, but government programs help replace some of the losses, lessening people’s financial burden. Such programs, to expand wage insurance, sick leave or disability insurance, would require new resources from the government or employers.

“We just don’t have as robust of a system that protects people against large changes in their household income,” said Matt Notowidigdo, an economist at Northwestern University, and another co-author of the paper.

In their study of California patients, the researchers found that hospitalized older Americans, who typically earn Social Security income and tend to be retired, didn’t have the same heightened risk of bankruptcy as their younger peers. It was another indication that what we often think about as medical bankruptcy may be more about how sickness affects work than the cost of medical bills.

David Himmelstein, a professor of public health at Hunter College, was the co-author of a much-cited paper estimating that medical problems were responsible for a large proportion of American bankruptcies. (Another co-author was the Harvard Law professor Elizabeth Warren, now a Massachusetts senator.) Dr. Himmelstein said, based on his research and his experience as a physician, that he wasn’t surprised to see how lost work was contributing to the financial travails of the sick. His original paper called not just for health insurance, but also for disability insurance.

Getting Sick Can Be Really Expensive, Even for the Insured