Summary: On Memorial Day we mourn and thank the legions who fell in battle for the US. This Memorial Day we also mourn civilians who fell in recent mass killings, perpetrated with military-style assault rifles obtained by mentally unstable individuals. Sensible gun sale regulation would slow this bloodshed, say studies. Yet opponents once again are distorting the evidence. We offer resources to pursue honest debate.

“Gun bans do not work. Look at Chicago. If they worked, Chicago wouldn’t be the murder hellhole that it has been for far too long.” — Senator Ted Cruz, Republican of Texas

There were more gun murders in Chicago than in any other U.S. city in 2020, fueling the perception that it is the gun violence capital of the country. But Chicago is also the third-largest city in the country. Adjusted by population, the gun homicide rate was 25.2 per 100,000, the 26th highest in the country in 2020 …

The three cities with the highest gun homicide rates — Jackson, Miss.; Gary, Ind.; and St. Louis — had rates double that of Chicago’s or more. All are in states with more permissive gun laws than Illinois.

Chicago’s reputation for having the strictest gun control measures in the country is outdated. Mr. Cruz cited the city’s handgun ban — without noting that the Supreme Court nullified the ban in 2010. An appeals court also struck down a ban on carrying concealed weapons in Illinois in 2012, and the state began allowing possession of concealed guns in 2013 as part of the court decision. …

Gun control proponents have also argued that the patchwork nature of gun laws in the country makes it difficult for a state like Illinois with tough restrictions on the books to enforce them in practice. A 2017 study commissioned by the city of Chicago found, for example, that 60 percent of guns used in crimes and recovered in Chicago came from out of state, with neighboring Indiana as the primary source.

[Practical suggestions on how to effectively counter fact twisting.] 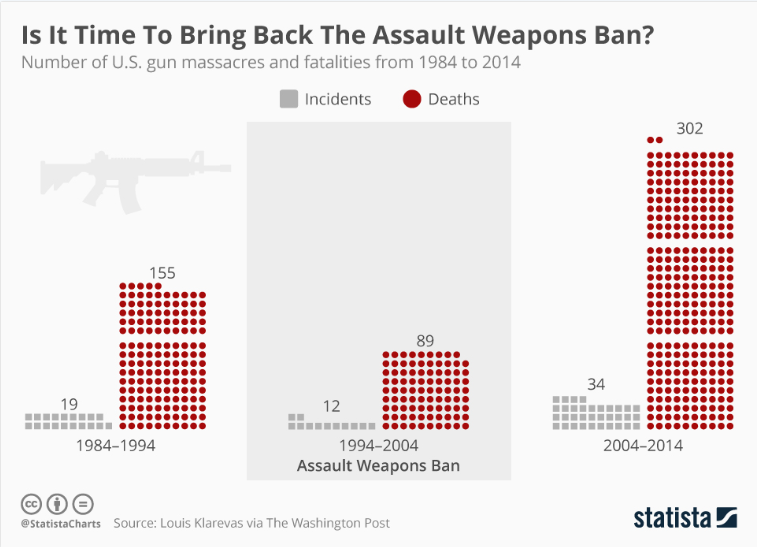 According to [Louis Klarevas], gun massacres fell 37 percent during the ban period and in the ten years after it lapsed in 2004, they went up an alarming 183 percent. Klarevas points out that the ban on high-capacity magazines holding more than 10 rounds made a huge difference. He says that if that is regulated, there will be a considerable drop in massacres and fatalities.

Controlling for … location and school characteristics, the rate of deaths was 2.83 times greater in schools with an armed guard present.

The well-documented weapons effect explains that the presence of a weapon increases aggression. Whenever firearms are present, there is room for error, and even highly trained officers get split-second decisions wrong. Prior research suggests that many school shooters are actively suicidal, intending to die in the act, so an armed officer may be an incentive rather than a deterrent.

We designate holidays to honor those who fought and who died in US wars. Although I am highly critical of many US wars, I am not a categorical pacifist. I believe that some of our wars were for necessary and admirable causes. Regardless, we should not blame the soldiers for terrible choices made by our leaders. I honor our veterans, especially my father, who served in a World War II German-Jewish immigrant military intelligence program.

But military weapons in the hands of civilians who are too young and/or mentally unstable and/or criminal is a horrendous mistake. In my view, it is an insult to those who wielded such weapons in service to their country. I recognize that the current interpretation of the Constitution’s 2nd Amendment means private ownership of guns cannot be banned. (Until 1959, the “well-regulated militia” clause was interpreted to mean that private ownership was not protected.) But even today, guns can be regulated. For example, universal background checks could be implemented, and high capacity bullet cartridges could be banned. More than 75% of Americans would like such reasonable regulation. It would reduce deaths. Yet the gun industry stymies action.

The GOP-proposed solutions have not been shown to work. Indeed the study cited above finds that having an armed school official worsens the problem.

Whenever a massacre occurs, Democrats and a few moderate Republicans push for regulation. Reliably, the GOP blocks legislation, and cites “data” in their defense. The data are distortions. The excerpts and links above give you a starter kit for arguing back. Here’s another – the reductions in gun killings in Australia after its 1996 gun buyback.

Please use these resources. Let’s implement the will of the vast majority. Let’s honor military service with honest debate about civilian guns.