The cost of private health insurance is out of control, compared to Medicare and Medicaid. You see that clearly if you take a long-term view of recently released federal data on health spending. 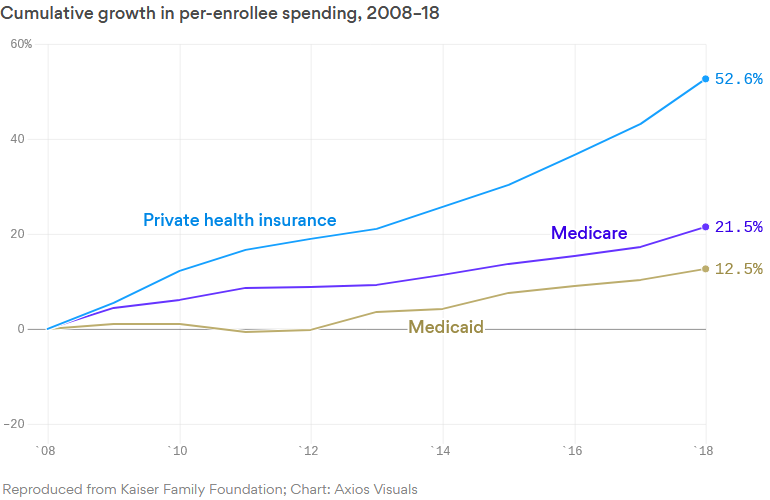 Why it matters: This is why the health care industry — not just insurers, but also hospitals and drug companies — is so opposed to proposals that would expand the government’s purchasing power. And it’s why some progressives are so determined to curb, or even eliminate, private coverage.

By the numbers: Per capita spending for private insurance has grown by 52.6% over the last 10 years.

The bottom line: The industry knows cutting government spending can only go so far. Any effort to rein in health care costs will have to confront the growth in the cost of private insurance.

The decade of 2008 to 2018 shows us that the private insurance industry has been far less effective in controlling spending increases than have our government programs – Medicare and Medicaid – in spite of the implementation of the Affordable Care Act. But the issues are different for each of these programs.

Medicaid, being a welfare program for low-income individuals and families, has been chronically underfunded primarily because of the lack of a strong political voice for those served by the program. Under a single payer Medicare for All program, this problem of underfunding would be eliminated since Medicaid beneficiaries would be moved into an equitable, universal program that covered everyone.

Although the rate of spending increases per Medicare enrollee over the past decade has been almost twice that of the Medicaid program, it has been less than half the rate for private health insurance. Considering that our national per capita health expenditures are about twice the average of other wealthy nations, it would seem illogical to push Medicare rates up to those of the private insurance sector. We do not have a pressing need to use public funds to pad private profits. Nevertheless, in some instances Medicare payments have been inadequate to ensure the viability of institutions such as rural hospitals, especially those with low volumes or a high percentage of uninsured, indigent patients.

Because Medicare payments often tend to be more modest than those of the private insurers some opponents of single payer are making outrageous claims such as fees for the health care delivery system would have to be cut by 40 percent. First of all, the method of determining payments would not be the same as with the current Medicare program. Hospitals would be paid through global budgets, much as fire departments are. Fee-for-service or capitation rates would be negotiated at a level that would ensure that the capacity of the system is adequate. That is, rather than being compensated at current Medicare rates, the system would be funded under an improved financing infrastructure at rates that would meet legitimate expenses and provide fair margins while avoiding gouging the taxpayers. Besides, reduction in payments that are made possible by reducing administrative overhead waste may be able to be achieved without any reduction in net income.

In looking at the graph you can see that the greatest source of our excessive health care spending is through the private insurers. When you think of what the insurance industry does, you can understand why that might be the case. Their primary business product is administrative services. The more they can sell to us, the more successful is their enterprise. The funds that they hold to pay medical claims are our funds, not theirs, whether they receive them through premiums or through government taxpayer subsidies. The greater the volume, the more administrative services they can sell us. Also, though they distribute about 85 percent of their revenues as medical benefits (medical loss ratio) they keep the other 15 percent or so for the administrative services they are selling us and for profits (or margins for the non-profits). So it is to their advantage to contract with hospitals and physician groups for higher rates since they keep a percentage of the total spent. It is no wonder that the spending curve for private insurers is so much higher than the public insurers who continue to strive for administrative efficiency and are not looking for profits (i.e., no need to shift our taxes from one column (revenues) to another (profits) on our federal budgetary balance sheets).

The private insurers are responsible for much of the excessive spending in our health care system, primarily in two ways. Besides their own profound administrative excesses, for which we pay, they place a tremendous administrative burden on the health care delivery system, for which we also pay. In addition, they have been far less effective in controlling excessive prices (think drugs, or oligopolistic hospital consolidation) than have been the public insurers. For those who challenge this contention, look again at the graph above. The private insurers have to go.