The rise of Medicare for All has triggered mixed reactions. Supporters see it as a cause for hope — the culmination of decades of research, education, and advocacy. President Donald Trump, on the other hand, is dyspeptic, fuming in his recent State of the Union that single-payer would “bankrupt our nation,” and vowing not to “let socialism destroy American healthcare.” A third group expresses sympathy for the goals of Medicare for All, and even acknowledges its policy merits, but sees the political obstacles as insurmountable — and advises that advocacy for such reform should be abandoned because it risks undermining beneficial, and more realistic approaches.

A clear-eyed assessment of institutional realities that will face the next presidential administration, Billy Wynn recently argued in the Health Affairs blog, should temper Democrats’ demands. He cautioned that Democratic victories in federal elections are far from secure; that Medicare for All may not be passable via budget reconciliation even if Democrats take the Senate with only a simple majority; and that Democratic legislators are, in any event, hardly unified in support of Medicare for All. Similarly, John E. McDonough recently warned that comprehensive healthcare reform has, in the past, required an elusive “super-majority Trifecta” — Democratic control of the House, Senate (with 60-seats), and Presidency. Even under such favorable conditions, he contends, our political capital might be better invested elsewhere.

While the hurdles are certainly formidable, steep political odds hardly compel us to abandon Medicare for All. Indeed, advice to drop the push for such reform rests on a misunderstanding of the dynamics of political change. History suggests that movements organized around ambitious demands can, over time, create the conditions for their passage — and that demands for radical change often advance, rather than undermine, the prospects for more incremental progress in the interim. As important, the life-and-death urgency of single-payer healthcare reform – too often underemphasized by its critics – has the potential to bring together a coalition of supporters across cultural, geographic and even class lines. It may, in other words, trigger a movement that could accomplish the unexpected.

1. The Dynamics of Political Change: Lessons from History

The institutional barriers that critics describe are real enough, and cannot be waved away. But they are also not immutable: throughout history, energizing issues have changed political contexts.

Consider, for instance, the passage of Medicare and Medicaid in 1965. Democrats had been stymied since the Truman administration in their efforts to pass a public national health insurance plan, obstructed in part by members of Congress intent on accommodating the insurance industry. John McDonough is right to emphasize that, from a narrow perspective, a super-majority Trifecta made Medicare achievable. 1964 saw a historic electoral shift, that, as Ted Marmor has noted, all but “guaranteed the passage of legislation on medical care for the aged.” But the achievement was only possible because people had been laying the groundwork for Medicare for years prior to the pivotal election. Senior citizen groups, progressive activists, organized labor, and allies in the civil rights movement forced it onto the national political agenda, holding politicians feet to the fire year after year — a point made by Natalie Shure in the Nation. Moreover, it required years of legislative efforts and coalition building to ready the ground for the final push. Had supporters not done so — had everyone waited to design and advocate for Medicare until the political chess pieces were in perfect position — the window would have opened, the window would have closed, and Medicare might very well not have come to be.

The same can be said for almost every sweeping political change in US history. The abolition of slavery, the reforms of the New Deal era, the civil rights legislation of the 1960s, and the legalization of gay marriage — none would have happened if reformers had patiently waited for the proper political alignment in the halls of Congress before envisioning, designing, and demanding change. The 2020 elections may or may not cause a political earthquake on par with 1964, but it hardly follows from this that we ought to lower our sights. After all, nobody can accurately predict when the pivotal shift will come. We do know, however, that if we wait for it happen, we will already be too late.

2. The Urgency of National Health Insurance

Dismissing Medicare for All as impractical also neglects the moral urgency of reform.

That uninsurance is deadly is no longer up for debate. Quasi-experimental studies of multiple coverage expansions have demonstrated that insurance reduces mortality (confirming earlier observational work), including: the Massachusetts health reform (number needed to insure [NNI] to prevent one death a year: 830); pre-ACA state Medicaid expansions (NNI: 239-316); and now the ACA Medicaid expansions (NNI: ~714 for adults 19-64). Two of these estimates are remarkably close to that of the randomized Oregon Medicaid Experiment (NNI: 769), although that effect estimate was not statistically significant. Most recently, however, another randomized study — of an intervention by the Internal Revenue Service — provided powerful experimental evidence that health insurance is life-saving. Regardless of which NNI estimate one uses, basic arithmetic makes clear that — with 30 million uninsured — tens of thousands of people are dying annually for lack of coverage. Notably, such deaths from lack of medical care are occurring everywhere, not only in states that have not expanded Medicaid. While non-expansion states have higher uninsurance rates, the number of uninsured in expansion states — for instance, 2.8 million in California and 1.0 million in New York — mean that hundreds or thousands are dying from lack of medical care a year in most states.

Critics might respond, however, by noting that Medicare for All is not the only way to address this challenge — that there might be other, and easier, ways to realize universal coverage. That being said, most other alternative health reform proposals would fail to achieve this end. Democratic presidential candidate Joseph Biden’s public option proposal, for instance, would leave some 3% of Americans (or approximately 10 million individuals) uninsured according to his campaign’s own estimates. A recent analysis by RAND researchers of a Medicare “buy-in” for those age 50-64 found that it would have “little to no effect on total health insurance enrollment.” An estimate from the Congressional Budget Office similarly found that a public option made available on the ACA exchanges would have “minimal effects on … the number of people who would be uninsured.” And a recent analysis from the Urban Institute found that a package of reforms that included a public option could leave as many as 21.3 million uninsured. In fairness, other more expansive proposals might cover everyone. Nonetheless, in addition to achieving universal coverage, Medicare for All is uniquely designed to do something else: achieve a universal improvement of coverage.

Rising copays and deductibles are causing more and more patients to go without needed care, or to face harsh financial consequences when they do. Underinsurance is, today, as much a problem as uninsurance — and, according to estimates from the Commonwealth Fund, is growing most rapidly among those with employer-sponsored coverage. Exhibit 1 provides rates of uninsurance (including those with lapses of coverage) and underinsurance in 2018. Overall, about 1 in 3 Americans — or more than 100 million individuals — fall into one of these categories, and can be classified as having deficient health coverage.

Similar to uninsurance, underinsurance has staggering adverse effects on health. Exhibit 2 presents evidence, drawn exclusively from randomized or quasi-experimental studies, on the health consequences of copays or deductibles for patients with six conditions: high blood pressure, heart attacks, diabetes, breast cancer, multiple sclerosis, and rheumatoid arthritis. For those with each of these diseases, cost-sharing deters the use of needed medications and care and, in many instances, causes demonstrable clinical harm.

Exhibit 2: Health consequences of copays and deductibles for those with select diseases 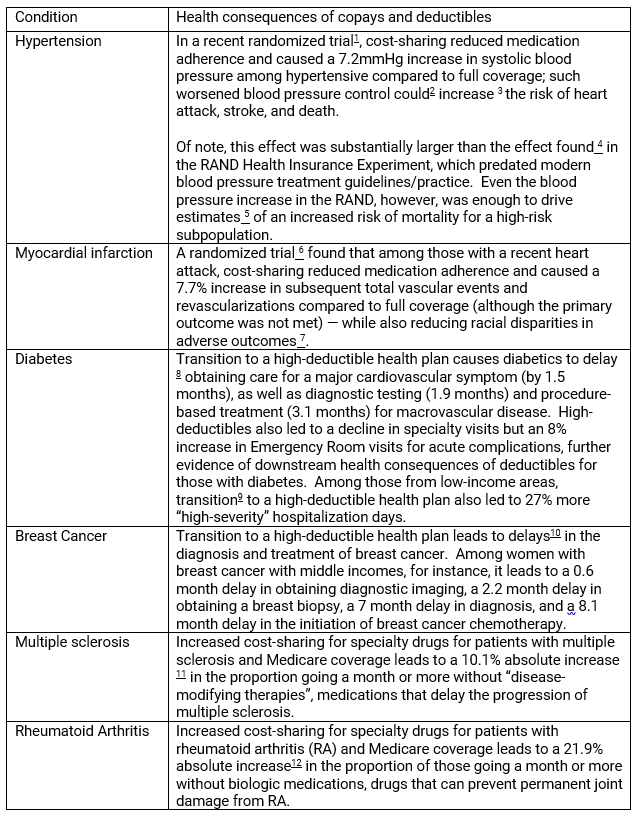 Medicare for All — unlike other reforms — would alleviate such widespread and unnecessary suffering not merely by covering the uninsured, but by eliminating financial barriers to care. Rising costs from higher care utilization will be offset by large savings from simplifying administration. Indeed, a recent systematic review found that some 19 out of 22 economic analyses of Medicare for All predicted overall savings in the first year as a result of such efficiencies. Transforming healthcare financing is what makes such an unprecedented coverage expansion economically — and hence politically — feasible.

The policy advantages of Medicare for All, in other words, aren’t mere minutiae: they are part of the force for political change.

Medicare for All: The Link Between Policy and Politics

Yet policy and politics are linked in another, more fundamental way. The experience of illness and of medical care is almost universal. This means that in the United States, encounters with our dysfunctional healthcare financing system are also near universal. How many have never had a spell of being uninsured, dealt with an onerous copay or deductible, contended with a medical bill or collections agency, gone without needed care because of cost, or faced a denial of care from their insurer? It is not merely uninsured Americans who have much to gain from single-payer reform, in in other words, but also those with chronic conditions who pay a tax for their illness in the form of cost-sharing; those with Medicare coverage who lack dental and long-term care benefits; those with Medicaid who must hurdle administrative barriers to remain covered and face frequent “churn” out of the program, and who sometimes have inferior access to care. Indeed, even those satisfied with their employer-sponsored coverage know that they are but one sickness — and consequent job loss — away from losing it.

All of which is to say that at the end of the day, the vast majority of the nation could benefit from single-payer reform — and that fact makes it winnable. Above all, however, we can be sure of one thing: not bothering to push for Medicare for All today will guarantee that it doesn’t happen tomorrow.

Author’s Note: The author serves as President of Physicians for a National Health Program (PNHP), a non-profit organization that favors coverage expansion through a single payer program. He does not receive compensation from that group, although some of his travel on behalf of the organization is reimbursed by it. He wishes to thank Phillip Rocco, Natalie Shure, David Himmelstein, and Steffie Woolhandler for their review of drafts of this article and helpful suggestions for revision; any errors are the author’s alone.