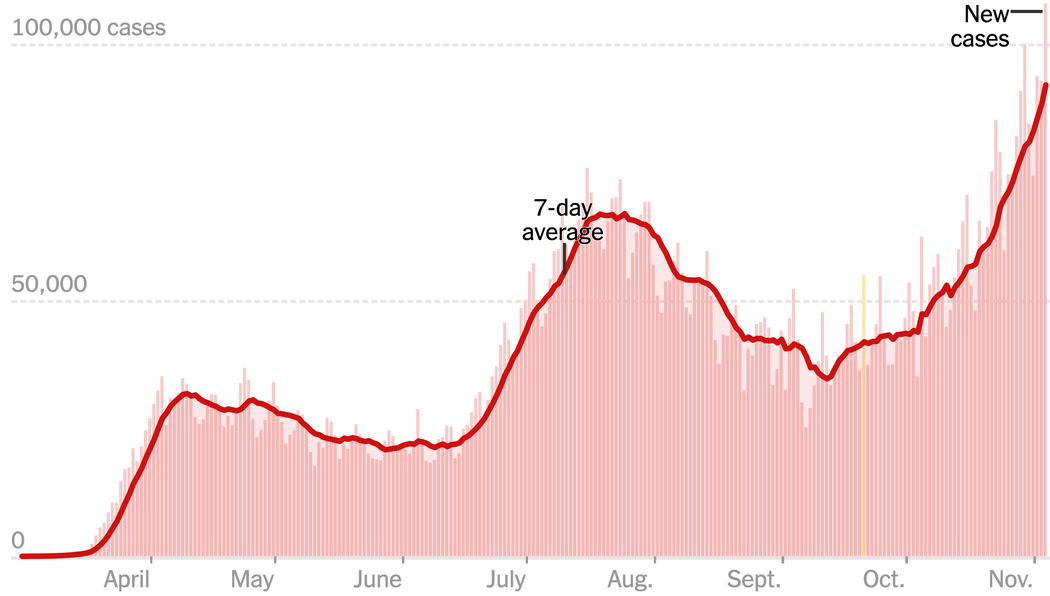 Learning From November 3: A Wake-Up Call for Public Health

This was supposed to be an election about health. For the first three years of his presidency, Donald Trump presided over what appeared to be a robust economy, which he made the foundation of his re-election campaign. Polls last year suggested economic gains that could place Trump in a favorable position for re-election. Then, in 2020, there came a novel coronavirus, which became known as COVID-19. As of now, more than nine million Americans have been infected with COVID-19, and over 233,000 have died, a story that rightly has dominated the national conversation.

In response to this crisis, the president acted in direct opposition to public health and medical advice, sometimes seeming to reject the very existence of COVID-19, and making this outlook central to his re-election platform. This seemed at dramatic odds with how the country felt about COVID-19. Polls suggest that Americans consider COVID-19 to be an important threat—in June, 66% of Americans said they were worried about exposure to the disease. This concern is, of course, consistent with reality, with hundreds of thousands of Americans dying and many more becoming infected with the virus.

This set the stage for an election that seemed to be entirely about health. This dramatic health concern dominated public attention like no other in 100 years, and the election featured two candidates, one of whom—Vice President Biden— contended that he would follow the advice of public health experts in order to control the pandemic, while the other—President Trump— suggested little concern about COVID-19, an attitude in direct opposition to what the general population seemed to think about the pandemic.

All of this pointed to an election that would see the votes align with public perception of the virus, bringing Vice President Biden swiftly to power. That is not, of course, what has happened. While the election results remain uncertain, it is now clear that, regardless of who will eventually win, there was no dramatic sweep for Biden, and voters remain as evenly divided about the candidates as they were four years ago in the close race between Donald Trump and Hillary Clinton. This is the case despite the President’s apparent misalignment with the public’s attitude towards the pandemic.

So, what happened? What does this teach us? There is much, of course, that goes into the science of elections and voting, and one could focus much attention on the mechanics of voter influence, on efforts to suppress the vote, and on candidates’ efforts to persuade voters by making claims that may not hew exclusively to the truth. However, I would argue that this moment conveys two key insights, both of which are directly applicable to our understanding of health.

First, this moment teaches us humility in how we think about the importance of health. While the COVID-19 pandemic has been overwhelmingly an issue about health, and while it has captured public attention, with poll after poll showing that people care deeply about the pandemic, it is not at all clear that voters were willing to take the necessary steps to mitigate the virus. It is not at all clear that the steps involving widespread economic shutdown were palatable to the population despite its concern with the virus. This should be a critical wake-up call for those in public health. Simply speaking, health, on its own, was not enough to sway the election, and voters showed, decisively, that despite overwhelming concern about the pandemic, they were not willing to put aside everything else in the service of maintaining their health. This runs dramatically counter to public health thinking around the importance of the approaches necessary to contain the virus, which often involve substantial economic sacrifice, including lockdowns. This was seen, for example, in the recent John Snow Memorandum, which was drafted to repudiate the Great Barrington Declaration, the latter document suggesting a different approach to the pandemic that de-emphasized widespread lockdowns. Fundamentally, public health’s call in the past year has been premised on the notion that we should do nothing but ensure, to the best of our ability, that as few people as possible get the disease, and that anything falling short of this goal is unacceptable. The election shows us that message is not well received, and we have failed to articulate a message, through the political fog, that is well received and is responsive to what a large swath of the population wish for their health.

Second, I think this moment also teaches us about the deep divisions that characterize the country. I realize much has been written, and much more will be written, about how these divisions influence the electorate, and the implications of this for the election, in general, and for public health, in particular. I would argue that centrally, in the COVID-19 context, these divisions have widened the gap between those who are socioeconomically advantaged and those who are socioeconomically disadvantaged, with the former group largely advancing approaches to contain the pandemic that have disproportionately affected, and indeed harmed, the latter group. The economic challenge of COVID-19 has been deeply unequal, with job losses suffered by higher earning populations early in the pandemic largely returning, and lower earning workers remaining out of work. Simply put, those of us who are in a position of privilege have been perceived as proposing efforts to contain the virus that fundamentally affect and hurt those who are not in a position to make these recommendations or to implement these policies. This is, of course, a reflection of the undercurrents of socioeconomic division—which often overlap with racial/ethnic divides—that characterize the country. It is a stark reminder that there are socioeconomic divides in the country that are inextricable from the public perception of any public health decision or recommendation, even those that address the most consequential pandemic of this century.

In articulating these observations, I am simply trying to extract insight from this moment that is relevant to how we think about health. It seems that, at core, health is understood among the public to be a means to an end, not an end in itself. That end is being able to live a life as full and unencumbered as possible. Despite the public’s concern about sustaining the means to this end, the population is not overwhelmingly willing to sacrifice all aspects of their life at the behest of health. This seems particularly to be the case when the burden of sustaining these means falls disproportionately on a group that is not dictating the terms of what these measures must be.

I realize that there are many other complexities at work in this election, but I suggest that these points, in the light of this historic and perplexing day, are the most urgent takeaways of the moment. It seems fair to attribute agency to the voters who have, at this moment, spoken in a way that is different from how we in public health might have expected. It seems to me that it falls to us in public health to learn from what has happened, to think carefully about what the meaning of health is to a population, and to consider the role that socioeconomic and other divides play in shaping public attitudes. The issues raised by this election outcome suggest the need to redouble our effort to bridge the gaps between socioeconomic haves and have nots, and health haves and have nots, and to see health as a path toward doing so.

Sandro Galea, a physician, epidemiologist, and author, is dean and Robert A. Knox Professor at Boston University School of Public Health.

Sandro Galea is one of the great intellectuals in public health in the world today. With our worsening health care crisis due to the COVID-19 pandemic, and with the failure of the most important players in the pandemic – the people – to join together to ameliorate and eventually end this crisis, there is a compelling need to listen to the words of Professor Galea.

We are in the third and worst wave of this crisis. People are understandably very unhappy in being exposed to the potentially disastrous impacts on their health, not to mention the profoundly negative social and economic impact of the pandemic. Yet far too many have decided to abandon the best recommendations of our public health experts, and, instead, politicize it by following the bizarre lead of our president who has rejected health policy science in favor of… well, whatever it is that he is trying to do. It is no coincidence that the divide in our responses to the pandemic seems to match the political divide demonstrated by the election results this week.

But the concerns about the health of the nation are not evenly divided. When you find that you are in places where pandemic precautions are an imperative, the mask count is very high. Yet political functions led by our president have a very low mask count and exhibit entirely inadequate social distancing. Though most of us have at least some concern, it is difficult to know what percentage of our nation is willing to throw caution to the wind and ignore the best advice of our public health experts.

Some of us were actually naive enough to believe that the belligerent rejection of public health science by our president – a position that has contributed to the tragic trends noted in the pandemic curve above – would cause Americans to reject this callous carelessness by replacing our current president with someone who presumably would acknowledge the seriousness of the crisis and attempt to address it with essential government functions that are absolutely required to reduce the terribly tragic impact of the pandemic. Yet the nation remained split on what type of leadership we need in this time of crisis.

There are no simple answers, but everyone should try to understand Galea’s message. That is the first step we must take as we then come together to heal. It takes only a few to propagate the novel coronavirus. How are we going to bring them into our community tent designed for all if half of us support their ways through our political choices?