While the progressive flank of the Democratic Party has coalesced around proposals to enact a government-run health system to achieve universal health coverage, such as Sen. Bernie Sanders’ (I-Vt.) “Medicare for All” plan, skeptics have sounded the alarm on the adverse effects for providers, warning that millions of newly insured Americans could overburden hospitals and cause lengthy wait times to see a doctor.

But new research published in the Annals of Internal Medicine found that the enactment of the two most sweeping health reform laws in American history — Medicare and Medicaid in 1966 and the Affordable Care Act in 2014 — did not spur a surge in overall hospital use, which remained stable in the wake of both expansions.

The study, led by Physicians for a National Health Plan President Adam Gaffney, used data from the National Health Interview Survey (conducted from 1962-1970) and the Medical Expenditure Panel Survey (2008-2015) to analyze how previous health insurance expansions in the United States affected utilization of inpatient services. Utilization was measured as a function of hospital discharge rates and days spent in the facility. 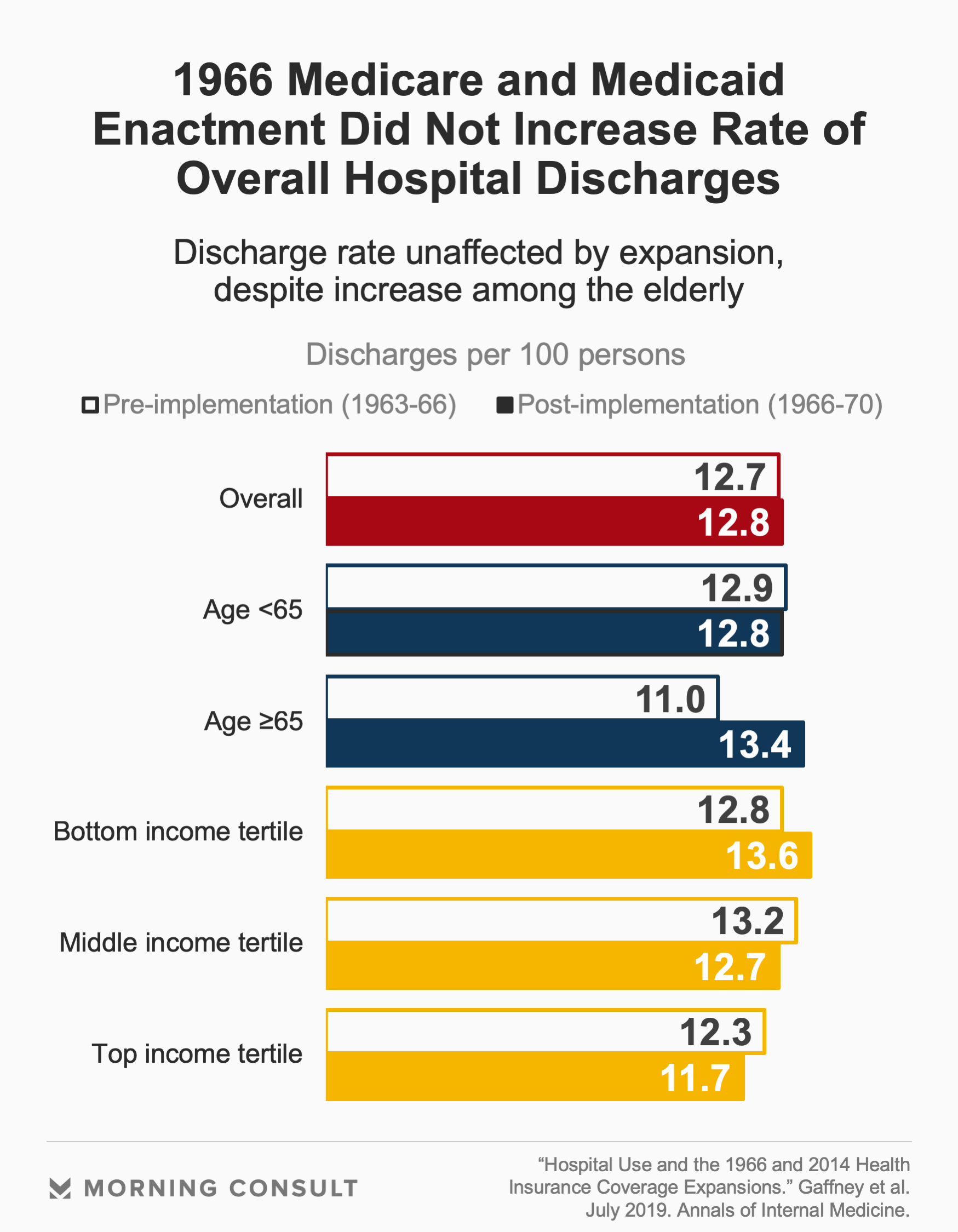 In the case of Medicare and Medicaid, the average overall hospital discharge rate in the three years prior to implementation and the four years after was statistically unchanged, the study found. While average days spent in the hospital increased two years after expansion, the consequences of rising hospital use among seniors and the low-income population were mitigated by reductions in use among younger, wealthier people. 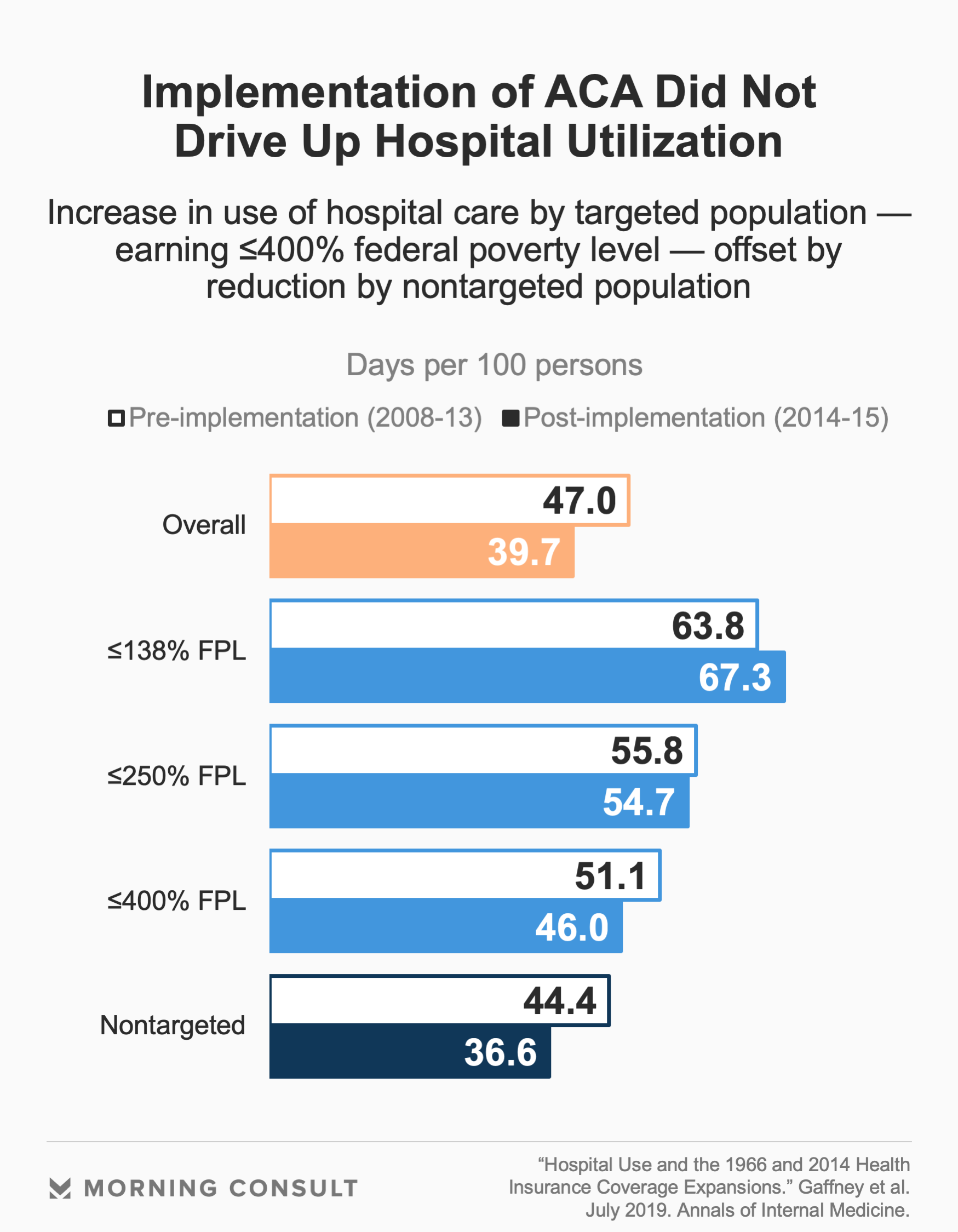 According to Gaffney, the research demonstrates that the effect of insurance expansions on hospital use is a matter of redistribution rather than increase. When operating rooms and hospital beds are plentiful, physicians are more likely to put them to use. But after more people obtain health insurance, there is a slight fall in supplier-induced demand among healthier, high-income people.

Major trade organizations representing hospitals, such as the Federation of American Hospitals and the American Hospital Association, have fiercely opposed Medicare for All and public option proposals calling for an increased government role in the health care system. But for hospitals, the driving concern is not utilization, but rather issues of payment and reimbursement.

“Medicare payments are already 11 percent below the cost of care,” Jeff Cohen, the Federation of American Hospitals’ executive vice president of public affairs, said by email. “Displacing private insurance and exposing community hospitals to Medicare payments for all patients will result in hospital closures and service line disruption compromising patient access to care.”

Unlike the ACA and 1966 expansion of Medicare, the current proposals to expand coverage dramatically reduce or completely eliminate patient costs such as deductibles and premiums. As such, hospitals anticipate utilization may increase not only because of coverage expansion but also the reduction in patient cost-sharing compared to the current system.

Aaron Wesolowski, vice president of policy research, analytics and strategy at the American Hospital Association, said by email that though hospitals and health systems support closing coverage gaps and achieving comprehensive health coverage for every American, that can be accomplished by building on the current public-private system.

“Coverage expansion is one factor that affects inpatient hospital use, but insurer limits on treatment, appropriate discharge to other facilities or the home and the rise in outpatient services are also a factor,” Wesolowski said.

But according to Gaffney, utilization effects are an important factor in addressing potential price effects. Stable utilization, taken alongside potential savings from Medicare for All across different industries within the health system, could end up reducing national expenditures across the board, he said.