Understanding the Medicare For All Act of 2019

Sen. Bernie Sanders (I-Vt.) has introduced substantive single-payer legislation in the U.S. Senate. The Medicare For All Act (S.1129), which was filed April 10, 2019, would establish a universal single-payer health program to ensure care for all residents of the United States.

Overview of the bill

Based on our analysis, we find the Medicare For All Act of 2019 to be a significant step forward in the fight for single payer. Taken together with Rep. Pramila Jayapal’s Medicare for All Act (H.R. 1384), it would transform the U.S. health care system, making health care a human right. 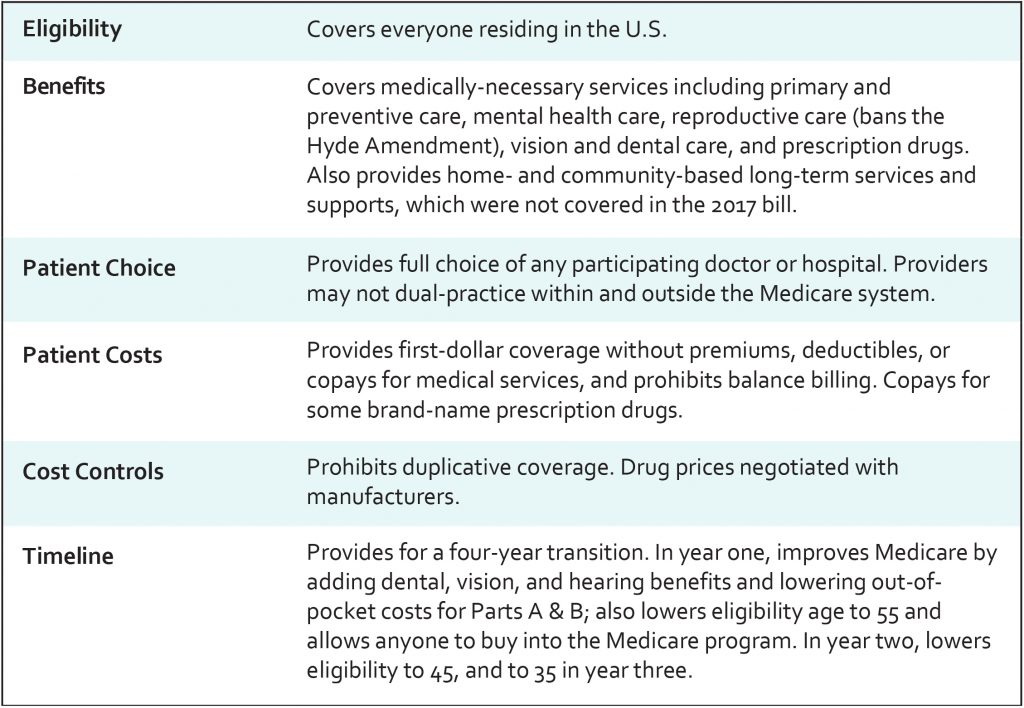 How can the bill be improved?

Based on decades of careful analysis and research, PNHP recommends several improvements to the Medicare for All Act that would save even more money and improve patient care:

Fund hospitals through global budgets, with separate funding for capital projects: A “global budget” is a lump sum paid to hospitals and similar institutions to cover operating expenses, eliminating wasteful per-patient billing. Global budgets could not be used for capital projects like expansion or modernization (which would be funded separately), advertising, profit, or bonuses. Global budgeting minimizes hospitals’ incentives to avoid (or seek out) particular patients or services, inflate volumes, or upcode. Funding capital projects separately, in turn, allows us to ensure that new hospitals and facilities are built where they are needed—not simply where profits are highest. They also allow us to control long term cost growth.

End “value-based” payment systems and other pay-for-performance schemes: This bill continues current flawed Medicare payment methods, including alternative payment models (such as Accountable Care Organizations) established under the ACA, and the Medicare Access and CHIP Reauthorization Act of 2015 (MACRA). Studies show these payment programs fail to improve quality or reduce costs, while penalizing hospitals and doctors that care for the poorest and sickest patients. PNHP recommends that Sen. Sanders end all value-based payment and pay-for-performance programs, as outlined in Section 903 of Rep. Pramila Jayapal’s single-payer bill, H.R. 1384.

Fully cover all medications, without copayment: Sen. Sanders’ bill excludes cost-sharing for health care services. However, it does require small patient copays (up to $200 annually) on certain non-preventive prescription drugs. Research shows that copays of any kind discourage patients from seeking needed medical care, increasing sickness and long-term costs. Experience in other nations prove that they are not needed for cost control.

See below for a list of current Medicare For All Act co-sponsors. It is important to build as much support for single payer as possible, and you can help!

To find your senators by state, click here. If you have trouble locating contact information for your senators, you can always call the U.S. Capitol switchboard at (202) 224-3121.

Sen. Sanders was joined by several co-sponsors, leaders from National Nurses United and the American Medical Student Association, and other health justice advocates to introduce the bill on April 10, 2019. PNHP live-tweeted the press conference (be sure to follow us @PNHP).

Proposed Medicare for all gives patients “freedom of choice”
Interview with Sen. Bernie Sanders
CBS Evening News, April 9, 2019
Sen. Bernie Sanders on Wednesday plans to introduce his ambitious plan for guaranteeing health care for everyone in America. He spoke to Ed O’Keefe about what Medicare for All would provide. View video…

Sanders relaunches ‘Medicare for All’ with Dems divided
By Ricardo Alonso-Zaldivar and Elana Schor
AP, April 10, 2019
Sen. Bernie Sanders launched a revamped “Medicare for All” plan on Wednesday, highlighting a divide among Democrats over one of their bedrock 2020 campaign issues — the future of health care in America. Continue reading…

The Health 202: Bernie Sanders is about to roll out an even more expansive Medicare-for-all bill
By Paige Winfield Cunningham
The Washington Post, The Health 202, April 10, 2019
Bernie Sanders – the senator who first coined the term “Medicare-for-all” – will unveil an updated, expanded version of his bill this morning. And it’s one that would dramatically overhaul the U.S. health-care system and promise an even more generous array of benefits to Americans. Continue reading…

Bernie Sanders Introduces New Medicare For All Bill, Welcoming War With Insurance Industry
By Daniel Marans and Jonathan Cohn
HuffPost, April 10, 2019
Bernie Sanders on Wednesday is formally introducing an updated version of his bill to enroll every U.S. resident in a single, government-run health insurance plan. This new iteration of “Medicare for All” legislation looks a lot like the previous one. Continue reading…

Examining Sanders’ Medicare-For-All Proposal
By Julie Rovner
NPR, Weekend Edition, April 13, 2019
Bernie Sanders has introduced a new version of his “Medicare for All” bill that was a cornerstone of his 2016 presidential campaign. He’s one of several Democratic candidates for president who support some form of national single-payer coverage. Continue reading…

From abortion to immigration, things you didn’t know were in Medicare for All
By Alice Miranda Ollstein and Joanne Kenen
POLITICO, April 10, 2019
The Medicare for All bill unveiled by Sen. Bernie Sanders on Wednesday would provide universal health care coverage, swallowing both the current public programs like Medicare and Obamacare, as well as private health insurance, into one new unified system. Continue reading…

Sanders town hall audience cheers after Fox News host asks if they’d support ‘Medicare for All’
By Brooke Seipel
The Hill, April 15, 2019
“I want to ask the audience a question here. … How many are willing to transition to what the senator says, a government-run system?” Baier asked before the crowd burst into cheers. Continue watching…