Conservatives have long held that the free market can resolve system issues of access, costs, affordability and quality of health care. Long experience with privatized health care in this country, however, gives us solid evidence that privatization brings higher costs, less efficiency, less service, more bureaucracy, waste, and profiteering than not-for-profit public programs. Moreover, privatized companies and contractors keep coming back to the public till and taxpayers for more money as their inefficiencies mount. Despite all this, privatization of health care has been expanding and thriving under the Trump administration.

The extent of for-profit ownership of U. S. health care providers is much higher than many realize, as shown below. 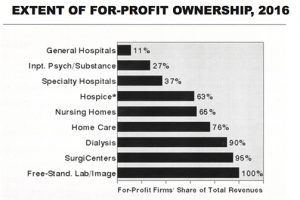 Let’s take a look at how the private sector has performed in five parts of our system compared to their not-for-profit counterparts.

Health insurers are increasingly dependent on government programs and subsidies for their growth. Over the ten-year period 2007 to 2017, Medicaid accounted for the largest increase in net premiums written growth, from $43 billion to $224 billion, while Medicare reported increases from $69 billion to $202 billion. 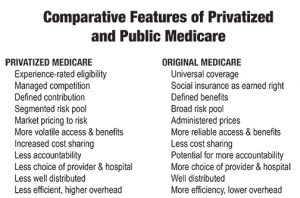 The publicly administered VA has come under attack by many conservatives as they try to expand privatization of the VA based on the unproven ideology that veterans would have more choice and better care. The new private VA Choice program falsely claims that the private sector is more efficient than the VA, which remains underfunded despite serving increased numbers of veterans returning during and after 17 years of war. The evidence already shows that the traditional VA is more effective than VA Choice in these ways: 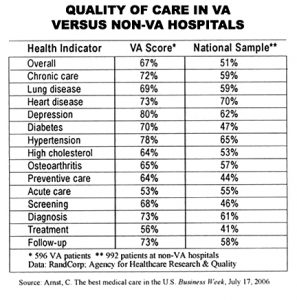 The forgoing shows that more privatization is not the answer to the nation’s problems of limited access, high and unaffordable costs, and unacceptable quality of care. Our health care system, the most expensive and inefficient in the world, is not sustainable and is in urgent need of fundamental reform, especially in the way it is financed, as subsequent blogs will discuss.

Adapted in part from my new recently released book, Trumpcare: Lies, Broken Promises, How it is Failing, And What Should Be Done