Shortly after introducing the “Medicare for All Act of 2017,” Sen. Bernie Sanders (I-Vt.) traveled to Canada to gain new insight about its single-payer health care system. He was accompanied by several medical professionals, including PNHP national coordinator Dr. Claudia Fegan and national board member Dr. Richard Bruno.

During this trip, Canadians expressed pride in a system that covers everybody while spending far less per capita than their neighbors in the U.S. Patients and doctors alike expressed dismay at the notion that Americans could be bankrupted by a serious illness, and that many uninsured and under-insured Americans forego care altogether.

Sen. Sanders concluded the trip with a rousing speech at the University of Toronto on Sunday, October 29, which can be viewed above. Footage of the event starts at 12:20, Sen. Sanders takes the stage at 28:40, and Sen. Sanders participates in a brief interview with noted Canadian activist Dr. Danielle Martin at 1:04:00.

Drs. Fegan and Bruno reflect on the trip 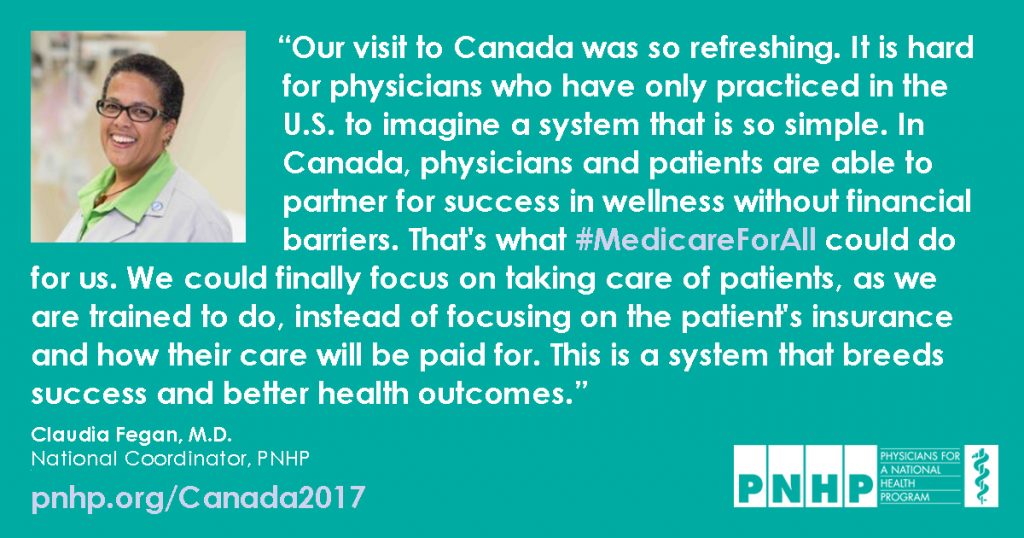 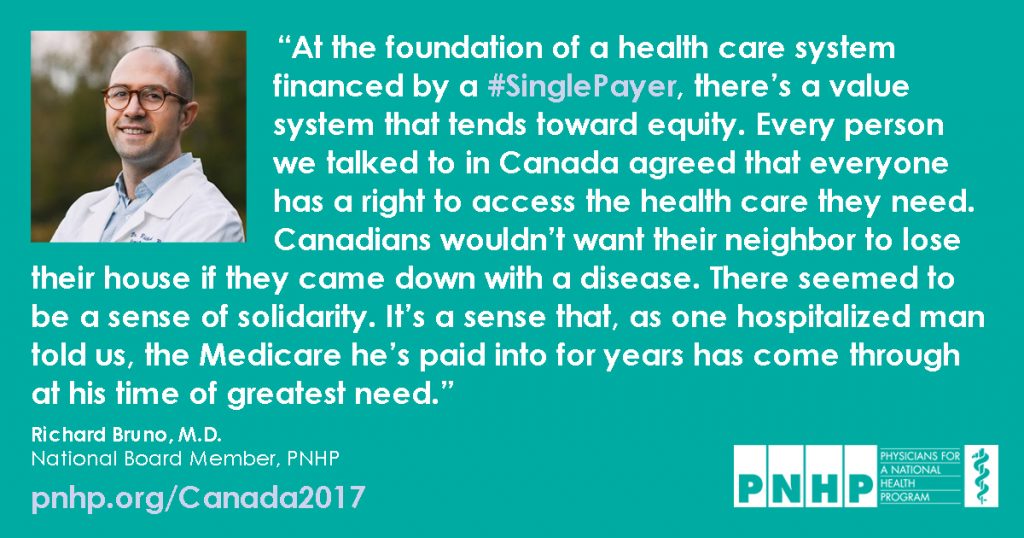 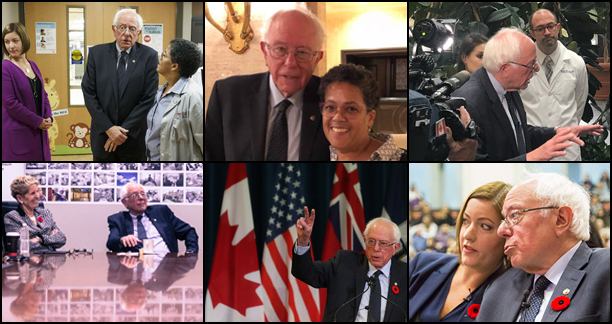 What Did Bernie Sanders Learn in His Weekend in Canada?
By Margot Sanger-Katz
New York Times, November 2, 2017
As he tells it, Senator Bernie Sanders of Vermont fell in love with the Canadian health system 20 years ago when he brought a busload of his constituents across the border to buy cheaper prescription drugs. Now he wants to make Americans fall in love with his proposal to make the United States system a lot more like Canada’s. Continue reading…

What Canada taught Bernie Sanders about health care
By Sarah Kliff
Vox, October 31, 2017
In late October, Sen. Bernie Sanders (I-VT) took a flight from Washington, DC, to Toronto. He sat in a cramped seat in the 21st row of the small plane. “I’m here to learn about your health care system,” Sanders told a woman behind him who asked for a selfie, shortly after the plane touched down in Canada. Continue reading…

What Corporate Media Failed to Learn About Canadian Single-Payer
By Michael Corcoran
FAIR, November 10, 2017
When it was announced that several journalists would travel with Sen. Bernie Sanders in October for a hospital tour of Canada to learn about its single-payer system, one question immediately sprang to mind:  What would corporate media do to smear universal healthcare this time? Continue reading…

Bernie Sanders compares U.S. health-care struggles to rights movements
By Theresa Boyle and Alex McKeen
Toronto Star, October 29, 2017
American Senator Bernie Sanders says insurance and drug companies, and those with extreme wealth, are hurting health care in the United States and warned Canadians not to allow that to happen on this side of the border. Continue reading…

Bernie Sanders speaks at Con Hall
By Jack O. Denton
The Varsity, October 30, 2017
Convocation Hall buzzed with energy the morning of October 29. Senator from Vermont and former Democratic presidential nominee Bernie Sanders was in town to give a talk titled “What the U.S. Can Learn from Canadian Health Care” to a packed house at the University of Toronto. Continue reading…

Postcard From Canada: In The Land Of Single-Payer, Bernie Sanders Gets Hero’s Welcome
By Shefali Luthra
Kaiser Health News, October 30, 2017
Sen. Bernie Sanders (I-Vt.) wasn’t scheduled to come onstage to talk health care until after 11 a.m. But college students started lining up as early as 5 a.m. — the Sunday morning of Halloween weekend, no less — in the hopes of scoring what appeared to be the weekend’s hot ticket. Continue reading…

Bernie Sanders Enlists Canada To Make The Case For Universal Health Care
By Daniel Marans
HuffPost, October 30, 2017
When Sen. Bernie Sanders (I-Vt.) arrived at the University of Toronto’s Simcoe Hall around 10:40 am on Sunday ahead of his sold-out speech on health care and progressive politics, the college students who had lined up outside in the 45-degree weather for standby tickets began to holler with joy. Continue reading…