The same cannot be said for those more centrist lawmakers who continue to defend the nation’s increasingly unpopular for-profit healthcare system. 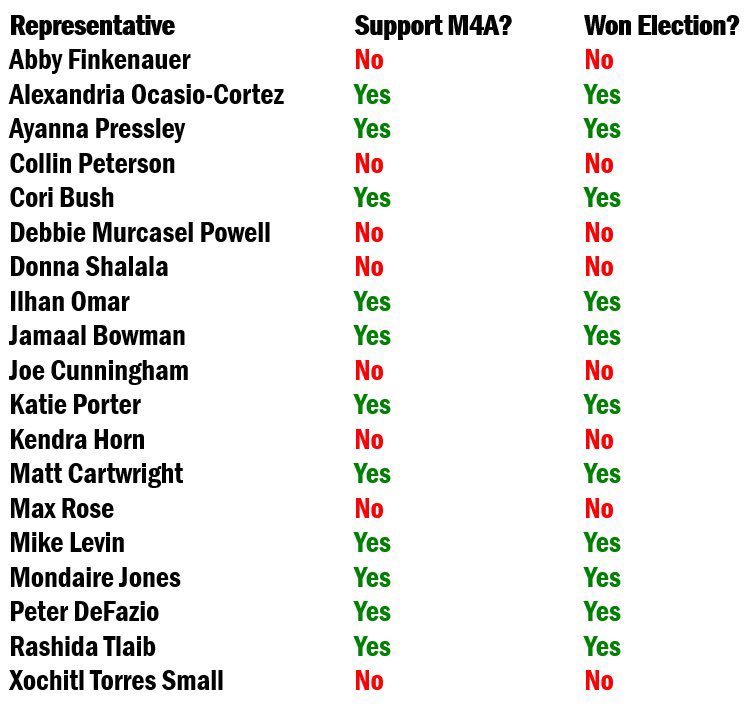 Highlighting an interesting—and to many, instructive—electoral trend that others have spotted in the days since 2020 voting ended earlier this week, Congresswoman Alexandria Ocasio-Cortez on Saturday—just as jubilation spread nationwide among Democrats and progressives upon news that Joe Biden will be the next U.S. President—pointed out that every single congressional member this year who ran for reelection while supporting Medicare for All won (or was on their way to winning) their respective race.

The tweet emerged as many across the corporate media landscape, including pundits and former high-level Democratic officials like Rahm Emanuel, unabashedly pushed a narrative that progressives calling for policies like a single-payer universal healthcare system or the Green New Deal are somehow a hindrance to electoral success. Ocasio-Cortez was not standing for it.

As Common Dreams reported Friday, while corporate-friendly Democrats have continued to go to bat for the for-profit healthcare system that lavishes billions of dollars each year on insurance companies, for-profit hospitals, and pharmaceutical giants, a new poll this week—put out by Fox News no less—shows that 72% of all U.S. voters would prefer a “government-run healthcare plan.” And the poll is far from an outlier, with numerous surveys in recent years showing this trend.

Representative James E. Clyburn of South Carolina, the third-ranking Democrat, said the party needed to overcome racial animus in the electorate, and had to shy away from certain far-left policies that alienate key segments of voters if Democrats wanted to win a pair of Senate seats currently in play in Georgia.

“Those two seats offer us the opportunity to change the dynamics in the Senate, but we are going to have to win those seats to do it,” he said. He cautioned against running on “Medicare for all or defunding police or socialized medicine,” adding that if Democrats pursued such policies, “we’re not going to win.”

Alexandria Ocasio-Cortez on Biden’s Win, House Losses, and What’s Next for the Left

We finally have a fuller understanding of the results. What’s your macro takeaway?

Well, I think the central one is that we aren’t in a free fall to hell anymore. But whether we’re going to pick ourselves up or not is the lingering question. We paused this precipitous descent. And the question is if and how we will build ourselves back up.
We know that race is a problem, and avoiding it is not going to solve any electoral issues. We have to actively disarm the potent influence of racism at the polls.

But we also learned that progressive policies do not hurt candidates. Every single candidate that co-sponsored Medicare for All in a swing district kept their seat. We also know that co-sponsoring the Green New Deal was not a sinker. Mike Levin was an original co-sponsor of the legislation, and he kept his seat.

To your first point, Democrats lost seats in an election where they were expected to gain them. Is that what you are ascribing to racism and white supremacy at the polls?

I think it’s going to be really important how the party deals with this internally, and whether the party is going to be honest about doing a real post-mortem and actually digging into why they lost. Because before we even had any data yet in a lot of these races, there was already finger-pointing that this was progressives’ fault and that this was the fault of the Movement for Black Lives.

Is there anything from Tuesday that surprised you? Or made you rethink your previously held views?

The leadership and elements of the party — frankly, people in some of the most important decision-making positions in the party — are becoming so blinded to this anti-activist sentiment that they are blinding themselves to the very assets that they offer.

I live in Orange County, California – a traditionally politically conservative county – home of the John Birch Society, the Nixon Western White House, and the Lincoln Club. For the last half century our Congressmen, all males, have been Republicans, until the 2018 midterm election. At that time, an environmental attorney, Mike Levin, ran for the seat. Health care remained a top concern that President Trump was not adequately addressing. Levin ran on progressive issues, strongly supporting Medicare for All and even including mention of Physicians for a National Health Program in his campaign literature. (He is a neighbor of mine, and I did support him in the campaign, but he was not influenced so much by me but rather by his own innate sense of health care justice.)

Once in Congress, Levin became an original co-sponsor of Pramila Jayapal’s Medicare for All Act of 2019 – H.R. 1384. When he ran for re-election this year he still quietly supported Medicare for All, but his health care emphasis has been to support expanding access on an urgent basis because of COVID-19, by strengthening the Affordable Care Act. He also supports other progressive causes such as eliminating the nuclear waste at our decommissioned San Onofre Nuclear Plans, and, importantly, supporting the large number of veterans who live here near Camp Pendleton. So he did continue to support Medicare for All, and he was re-elected.

I should mention another Democratic congressman, Harley Rouda, who was also elected in the Orange County Democratic sweep in 2018. Once in Congress, he declined to cosponsor Jayapal’s Medicare for All bill. He lost his current bid for re-election to a controversial Republican who, as a member of the Orange County Board of Supervisors, opposed requiring face masks during the pandemic, amongst other controversial positions.

Conor Lamb, a moderate from Pennsylvania, said that people are not clamoring for single payer health insurance nor the Green New Deal, but he was re-elected by a very narrow margin (51 to 49), so he seems to be an exception in this election by having survived in spite of his failure to support Medicare for All.

Also of interest is that Democrat Donna Shalala, a former HHS Secretary, was also opposed to Medicare for All, and she lost her bid for re-election to the House.