Summary: Recent news highlights the stark choice we face. Bernie Sanders’ updated Medicare for All bill was introduced in the Senate. Meanwhile, a JAMA Health Forum article reveals another way that corporations (this time, Pharma) manipulate prices to maximize profits on the financial backs of patients. The choice is clear!

Bernie Sanders Reintroduces Medicare for All Bill, Saying Healthcare Is a Human Right, Democracy Now, May 13, 2022

Vermont independent Senator Bernie Sanders has revived his bill to provide Medicare for all U.S. residents. The measure has 15 Senate co-sponsors, all of them in the Democratic Caucus. Sanders unveiled his proposal Thursday at a hearing of the Senate Budget Committee, which he chairs.

Sen. Bernie Sanders: “It is not acceptable to me nor to the American people that over 70 million Americans today are either uninsured or underinsured. As we speak, right now, this moment, there are millions of people in our country who would like to go to a doctor, who have to go to the doctor, but simply cannot afford to do so. This is unacceptable. This is un-American. And this cannot be allowed to happen in the wealthiest country on Earth.”

Health care is a right to all in:

If every other major country can guarantee health care as a right to all its people, why can’t we? Yes, it’s time for Medicare for All.

[T]his economic evaluation show[s] that from 2015 to 2019, the growth of prerebate prescription drug costs (used for patients’ cost sharing) outpaced the growth of postrebate drug costs for all 3 commercial plan types. 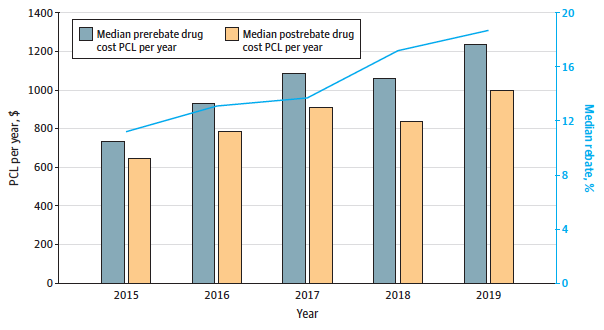 The contrast is clearly captured by the two graphics:

Bernie’s flags highlight that Medicare for All bill would finally place the US into the world of wealthy nations, which guarantee health care.

This subterfuge represents the system’s large players colluding (in effect, if not by formal grand plan) to shift more costs onto patients while padding already huge profits.

The choice is really very clear.