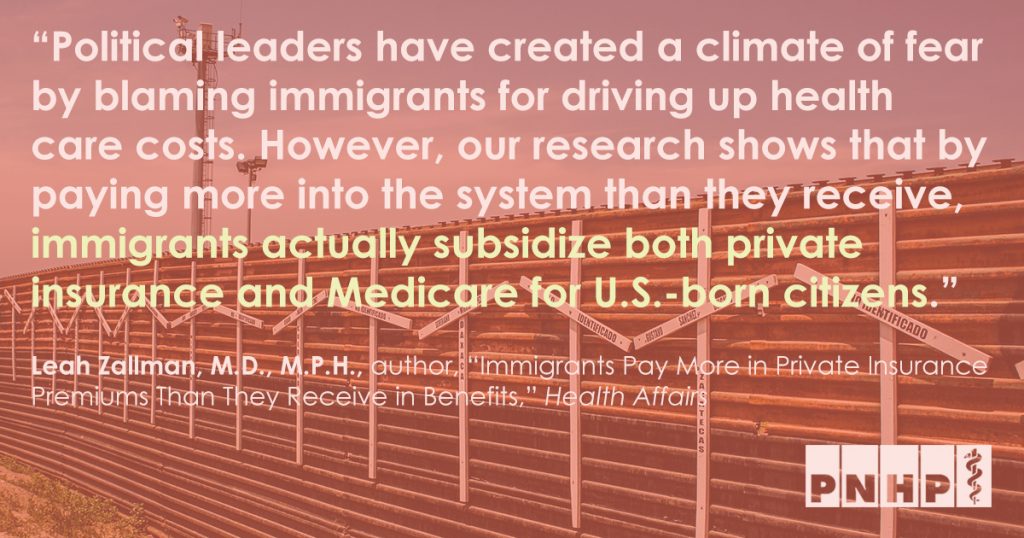 Do immigrants drive up health care costs for U.S. citizens? Despite loud claims from our political leaders, recent studies have found the opposite to be true. Immigrants in the U.S. make significant contributions to health care as taxpayers, as relatively healthy plan enrollees, and as dedicated health professionals. But they are still subject to scapegoating and discrimination.

“Review of Medical Expenditures of Immigrant Populations in the United States” was published August 8, 2018 in the International Journal of Health Services. It found that, as a group, immigrants pay more into private and some public health insurance programs (through premiums and taxes) than is paid out for their care. (PNHP press release here.)

“Immigrants Pay More in Private Insurance Premiums Than They Receive in Benefits” was published October 1, 2018 in Health Affairs. It found that immigrants pay billions more in private insurance premiums than insurers pay out for their care, thereby subsidizing the benefits of U.S.-born enrollees. (PNHP press release here.)

“Care For America’s Elderly And Disabled People Relies On Immigrant Labor” was published June 3, 2019 in Health Affairs. It found that the U.S. health care system as a whole is dependent on the work of over three million immigrants, who account for 18.2 percent of all health care workers. (PNHP Quote of the Day here.)

“Implications of changing public charge immigration rules on children who need medical care” was published July 1 2019 in JAMA Pediatrics. It found that the Trump Administration’s proposed public charge rule would likely cause millions of children to lose health and nutrition benefits, including many children with specific medical needs. (PNHP press release here.)

Rally to tear down barriers to care

PNHP members rallied outside of an Immigration and Customs Enforcement (I.C.E.) office in San Diego on November 9, 2018 as part of our Annual Meeting & Leadership Training. We demanded an end to draconian immigration policies and the enactment of an efficient, effective, and humane health care system that covers all residents of the United States, regardless of immigration status.

We were joined by several local organizations for the rally, including Women’s March San Diego, San Diego Border Dreamers, and Border Angels.

“Immigrants use health services at a lower rate than people born in the U.S.”
NPR, Marketplace, August 8, 2018

“U.S. immigrants pay more for health insurance than they get in benefits”
Reuters, October 10, 2018

“Health-care worker shortages would be even worse without immigrants”
Washington Post, Health 202, June 5, 2019

“Trump’s immigration proposal could cause millions of children to opt out of health benefits, study says,” CNN, July 1, 2019