Summary: A Reuters investigation found 7,571 inmate deaths across >500 US jails from 2008-2019, including nearly 5000 among inmates awaiting trial. Death risks were 18-58% higher in jails with healthcare managed by private companies.

A Reuters data analysis finds that jails with healthcare overseen by private companies incur higher death rates on average than those with care handled by government agencies. The story of a Georgia jail that hired Corizon Health Inc reveals the hidden cost of privatized inmate healthcare. . . . Jails with publicly managed medical services, usually run by the sheriff’s office or local health department, had an average of 12.8 deaths per 10,000 inmates in that time. Jails with healthcare provided by one of the five companies had an additional 2.3 to 7.4 annual deaths per 10,000 inmates. The death rates were 18% to 58% higher, depending upon the company.

The US locks up more people than any other nation, with people of color incarcerated at vastly higher rates than non-Hispanic Whites. Taking 2 million people’s freedom away is bad enough, but abusing them while incarcerated adds injury to injury.

Private healthcare firms have taken advantage of mass incarceration to generate profits from inmates’ suffering; their frequent neglect of even basic standards of care apparently drives up death rates. 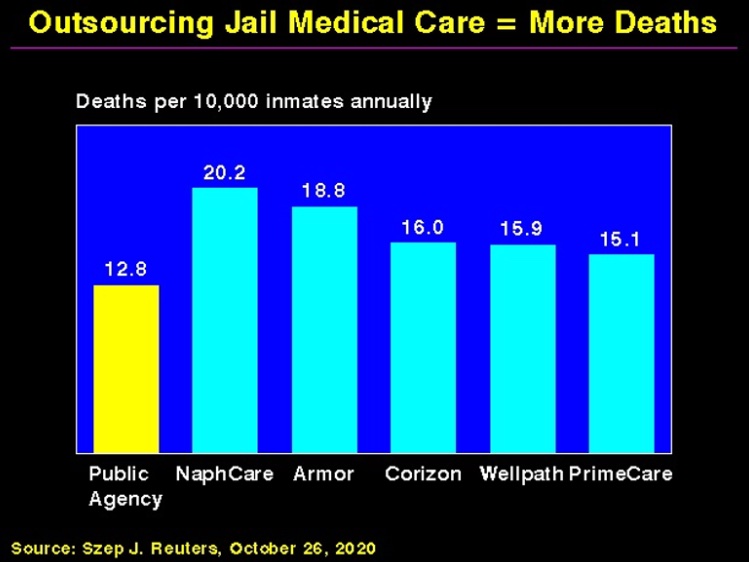