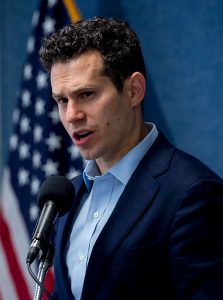 Physicians for a National Health Program (PNHP), a nonprofit research and educational organization, welcomes Dr. Adam Gaffney as its new president for 2019. Dr. Gaffney was unanimously elected at PNHP’s national meeting in November. PNHP now includes 22,000 members across 55 local chapters, as well as 65 chapters of the group’s student arm, Students for a National Health Program (SNaHP).

Dr. Gaffney is a pulmonary specialist at Cambridge Health Alliance / Harvard Medical School. He earned his bachelor’s and medical degrees from New York University, and a master’s in public health degree from the Harvard T.H. Chan School of Public Health. Dr. Gaffney completed his residency in internal medicine at Columbia University Medical Center, where he spent a year as chief resident. He also completed a clinical and research fellowship in pulmonary and critical care medicine at Massachusetts General Hospital.

Dr. Gaffney is a prolific writer and has published articles in prestigious medical and academic journals such as The Lancet, The BMJ (British Medical Journal), Chest, the European Respiratory Journal, and the Journal of Policy Analysis and Management, as well as mainstream news outlets such as the Washington Post, Guardian U.S., New Republic, Los Angeles Review of Books, Fortune, USA Today, Salon, CNN.com, Dissent, U.S. News & World Report, and Jacobin. His first book, “To Heal Humankind: The Right to Health in History” was published by Routledge in 2017.

“I’m honored to be taking on the role of PNHP president at such an exciting—but also dangerous—moment in the history of the single-payer movement,” said Dr. Gaffney.

Even though 70% of Americans support Medicare for all (including a majority of doctors), Dr. Gaffney expressed concern about political leaders undermining the policy goals of single-payer Medicare for all.

“We’ve been so successful in popularizing the idea of ‘Medicare for all’ that everybody wants in on the slogan—even if they have something completely different in mind, like a public option,” he said. “But tweaks won’t solve the fundamental problems of American health care: persistently high uninsurance, rising underinsurance, unaffordable drugs, narrow provider networks, and the growing corporate domination of health care that prioritizes profits over patients.”

Dr. Gaffney emphasized that an improved Medicare for all system cannot include a role for the bloated, profit-driven private insurance industry, which would undermine the goal of universal coverage. “The only way to achieve universal and comprehensive coverage is to eliminate the profits and administrative waste of the private insurance industry, which drains hundreds of billions of dollars from our health care system each year.”