Lately I’ve noticed some Democratic politicians defending the current healthcare system by saying it preserves “choice” for Americans. As a former health insurance exec who helped draft this talking point, I need to come clean on its back story, and why it’s wrong and a trap. 1/11

When I worked in the insurance industry, we were instructed to talk about “choice,” based on focus groups and people like Frank Luntz (who wrote the book on how the GOP should communicate with Americans). I used it all the time as an industry flack. But there was a problem. 2/11

As a health insurance PR guy, we knew one of the huge “vulnerabilities” of the current system was LACK of choice. In the current system, you can’t pick your own doc, specialist, or hospital without huge “out of network” bills. So we set out to muddy the issue of “choice.” 3/11

As industry insiders, we also knew most Americans have very little choice of their plan. Your company chooses an insurance provider and you get to pick from a few different plans offered by that one insurer, usually either a high deductible plan or a higher deductible plan. 4/11

Another problem insurers like mine had on the “choice” issue: people with employer-based plans have very little choice to keep it. You can lose it if your company changes it, or you change jobs, or turn 26 or many other ways. This is a problem for defenders of the status quo. 5/11

Knowing we were losing the “choice” argument, my pals in the insurance industry spent millions on lobbying, ads and spin doctors — all designed to gaslight Americans into thinking that reforming the status quo would somehow give them “less choice.” 6/11

An industry front group launched a campaign to achieve this very purpose. Its name: “My Care, My Choice.” Its job: Trick Americans into thinking they currently can choose any plan they want, and that their plan allows them to see any doctor. They’ve spent big in Iowa. 7/11 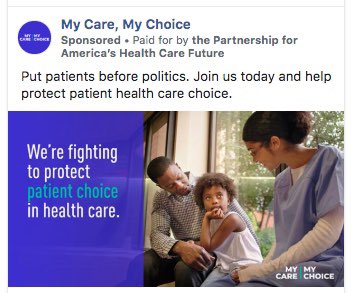 This isn’t the only time the industry made “choice” a big talking point in its scheme to fight health reform. Soon after Obamacare was passed, it created a front group called the Choice and Competition Coalition, to scare states away from creating exchanges with better plans. 8/11

The difference is, this time *Democrats* are the ones parroting the misleading “choice” talking point. And they’re even using it as a weapon against each other. Back in my insurance PR days, this would have stunned me. I bet my old colleagues are thrilled, and celebrating. 9/11

The truth, of course, is you have little “choice” in healthcare now. Most can’t keep their plan as long as they want, or visit any doctor or hospital. Some reforms, like Medicare For All, *would* let you. In other words, M4A actually offers more choice than the status quo. 10/11

So if a politician tells you they oppose reforming the current healthcare system because they want to preserve “choice,” either they don’t know what they’re talking about – or they’re willfully ignoring the truth. I assure you, the insurance industry is delighted either way. 11/11

With the help of the media, the political community opposed to single payer Medicare for All has convinced us that we do not want an undesirable “one-size-fits-all” model of health care reform that takes away our choices. They have countered with an advertising campaign touting “My Care, My Choice” which supposedly protects “patient choice in health care.” In his Twitter thread, former health insurance executive and current health justice advocate Wendell Potter exposes the fraud behind this framing.

Though the private insurance industry claims they are protecting choice in health care, they are not. They are protecting their market of private health plans in which you can choose what health care you are willing to give up by being restricted to networks that limit your choices of physicians and hospitals, limit your affordability of care through high deductibles and other cost sharing, or limit your choice to a plan offered by your employer.

I don’t like to call someone a liar, but when the insurance industry tells you that they are “fighting to protect patient choice in health care,” they are flat out lying. Insurers do not provide health care, and they sharply restrict what health care they will pay for, thus taking away choices in health care.

The Lie of the Year award just went to President Trump for his 80 false statements about the whistle-blower. But I would have voted to grant the award to the private insurers for their claim that they are fighting to protect patient choice in health care when their products are quite specifically designed to take health care choices away from patients.

Let’s renew our fight for single payer Medicare for All – the inclusive size that really does fit all – perfectly.

How about that for a sound bite: “Medicare for All – the inclusive size that really does fit all – perfectly.”