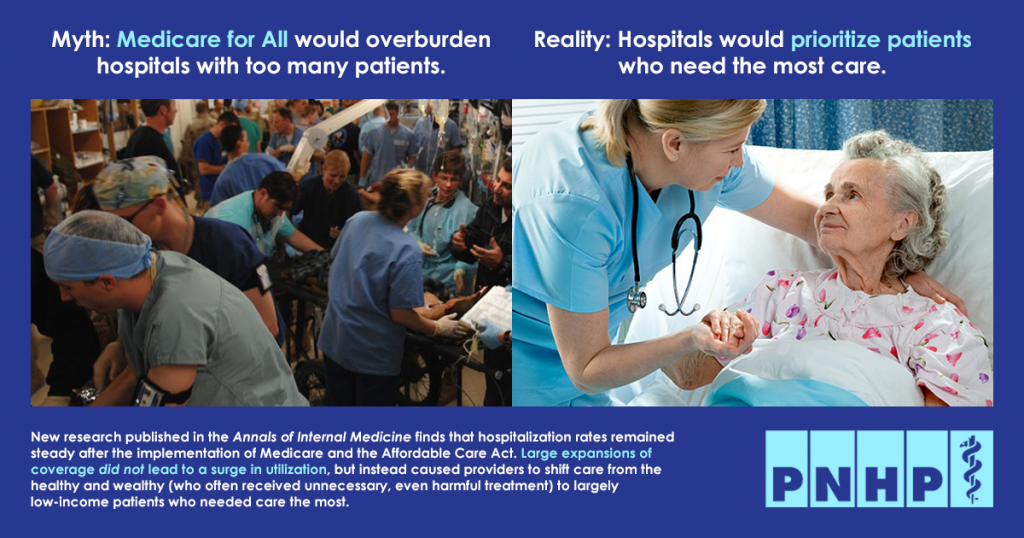 Policymakers and pundits often claim that universal health coverage would cause utilization of care to spike to levels that the health system could not sustain. But recent studies of real world coverage expansions have found no overall increase in hospitalizations or doctor visits following the implementation of Medicare, Medicaid, the Affordable Care Act, and even truly universal health systems in other nations.

Instead or patient pile-ups and intolerable queues, newly insured patients with significant medical needs were finally able to receive care while doctors cut back on unnecessary care for their wealthier and healthier patients. This shift in care was driven by doctors’ ability to prioritize patients based on medical need; previously over-served patients did not suffer from, or generally even notice, the difference.

“The Effects on Hospital Utilization of the 1966 and 2014 Health Insurance Coverage Expansions in the United States” was published July 23, 2019 in the Annals of Internal Medicine. It found that previous coverage expansions in the United States did not result in a net increase in hospital use, but did redistribute care to those with the most pressing medical needs. (PNHP press release here.)

“Coverage Expansions and Utilization of Physician Care: Evidence From the 2014 Affordable Care Act and 1966 Medicare/Medicaid Expansions” was published November 6, 2019 in the American Journal of Public Health. It found that the overall use of physician care did not change after the implementation of large-scale coverage expansions in the late 1960s and mid 2010s. (PNHP press release here.)

“The Effect of Large-scale Health Coverage Expansions in Wealthy Nations on Society-Wide Healthcare Utilization” was published November 20, 2019 in the Journal of General Internal Medicine. It found that coverage expansions in other wealthy nations did not lead to an increase in utilization of care. This held true from New Zealand in 1938 to the U.S. in 2010. (PNHP press release here.)

“Pricing Universal Health Care: How Much Would The Use Of Medical Care Rise?” was published January 5, 2021 in Health Affairs. It estimated that a Medicare-for-All program offering first-dollar universal coverage would lead to a 7-10% increase in outpatient visits, and a 0-3% increase in hospital use, figures far lower than most previous analyses. (PNHP press release here.)

PNHP president Dr. Adam Gaffney, lead author on these studies, posted a series of Twitter threads upon publication. Please click on the embedded tweets below for more details, and don’t forget to follow @awgaffney and @PNHP for regular updates on #SinglePayer #MedicareForAll. 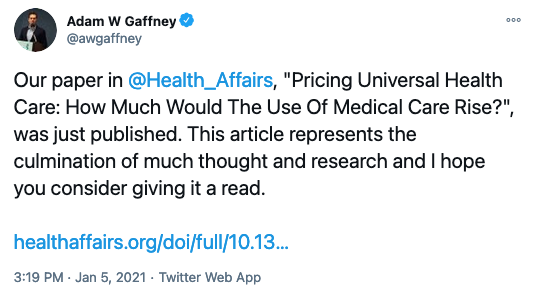 Happy to see our long-underway study published today in the @AnnalsofIM! “The Effects on Hospital Utilization of the 1966 and 2014 Health Insurance Coverage Expansions in the United States.” 1/?https://t.co/ex6Xb9pVzd
— Adam W Gaffney (@awgaffney) July 23, 2019

Our new research was just published in the American Journal of Public Health. We examined the effects of the implementation of Medicare/Medicaid in 1966 & the Affordable Care Act 2014 on the use of physician services … https://t.co/v8UaO1TY6H pic.twitter.com/v1ZDqdM0jf
— Adam W Gaffney (@awgaffney) October 17, 2019

We have a new paper just published at @JournalGIM, co-authored with @swoolhandler and David Himmelstein. We believe it informs the ongoing debate over the cost of Medicare-for-All. https://t.co/XFkTuwPkQl pic.twitter.com/8CXAddNwZ7
— Adam W Gaffney (@awgaffney) November 20, 2019